County Chairman delighted to see Under 18s finish in style

Cornwall RFU Chairman Dave Saunter, couldn’t have been happier after U18s won their last game of season 40-10 against top seeds Buckinghamshire. Congrats should go to all the boys and Andy Hawken’s coaching staff. It’s been a very good season for the boys and I’m sure a number will be heading to the final south west trial in January. A big thanks should also go to all the parents who made the trip up to Weston Hornets.

A list of the Boxing Day rugby fixtures that we are aware of.

It is recommended you check with the home club to confirm the actual kick-off times.

Falmouth One & All v Penryn Saracens 11 am

Phil & Marina Trevarton attended Penryn’s home game against Kingsbridge today to present the “Borough” with a couple of match balls to acknowelege their success last season.

Other presentations have taken place at Launceston, St. Agnes, St. Just and Veor.

Also cufflinks have been presented to the players and officials from last season’s Cornwall squad, with Penryn’s Grant Randlesome, George Jones and Marek Churcher receving theirs at the Kingsbridge game.

Short behind the scenes video, courtesy of Kevin Bishop on the yesterday’s get-together at Truro RFC. Cornwall Under 20s

Quarter Finals to be played on 30th November.

Cup fixtures to be played on or before the 28th December 2019.

Assistant coach vacancies for county U.15 & U.16 teams

Representatives from Cornwall RFU have recently met with Eden Project management team to add Eden to the sponsorship of our Senior XV for the Bill Beaumont Championship season.
Eden will be adding their logo to the new playing shirt that will be revealed at the Team Building event scheduled for February. The iconic Eden logo will be added to Tribute, Kelsall Steele and Brooks Macdonald as well as kit suppliers O’Neills’ logo, already on the playing shirt.
The CRFU are most grateful for the continued generous support that means that our players enjoy good opportunities to continue the success recently enjoyed.
Further details about the team building event are to be announced following the Development team game scheduled for Saturday 28th December at Wadebridge Camels RFC when the invited players will get their chance to stake their claim to join the existing Championship squad from 2019, who have already indicated their determination to retain the Bill Beaumont Cup.

A  preseason assessment match for both Cornwall U18s and Exeter Chiefs Outreach U18s on a sunny afternoon in Bodmin gave the spectators an entertaining match to watch, reports James Mills at Bodmin RFC

Chiefs started the brighter of the 2 teams and camped in the Cornwall 22 for the first 10mins, not helped by some needless infringements from the boys in black and gold. Cornwall were soon into the match and early signs were our lads had the upper hand at scrum time. Cornwall continued the pressure through a lively Tyler Dower at hooker probing the Chiefs defence on several occasions with strong purposeful carries. Eventually the pressure forced Chiefs to infringe and Kristian Davis at 12 took the option to kick for posts and take the first points of the match 3-0.

The game proceeded to be a good contest with both teams defence going at it but Chiefs managed to find away through after the Chiefs scrum half who looked a real talent all game managing a half break and off load out of the tackle to release the chiefs player to scamper over and score left of the posts which was converted.  3-7

With Cornwall in the ascendancy and with flanker Jack Mills for Cornwall gaining 4 turnovers, the pressure was on the Chiefs for the remainder of the half. Cornwall had 2 good opportunities, firstly off a sublime cross field kick from Cornwall flyhalf Kit May only for the Cornwall chasers to knock on during the gather a few metres short of the Chiefs line. The half finished with Jack Mills being judged to have been held up over Chiefs the line with Cornwall going into the turn around 3-7 down.

The second half was a similar affair with the scrum dominance from Cornwall but Chiefs taking the match early on, not helped by the needless offside infringements from our boys handing possession to Chiefs. Chiefs needed no invitation and they managed to break a midfield tackle to go over for their second score which was not converted 3-12

After yet more Cornish infringement and a quick thinking tap and go from Chiefs and a sleeping Cornish defence the Chiefs went under the posts with a converted score. 3-19

This appeared to have the desired wake up call for Cornwall and with Call Grohmann now on in the backs and full of energy chased down a loose Chiefs pass, putting huge pressure on their scramble defence to force a knock on. The Cornwall tight 5 packed down and with their dominance provided good ball for Huey Campbell to deliver good service to Kristian Davis now at 10 who span the ball out left to Freddie Davies, who popped it sweetly back inside to Davis on the loop and then Davis supplied the ball to fullback Eddie Pearce running a direct line who took the ball into contact with his opposite number and offloaded to the support runner Call Grohmann to finish it off for the score of the match.  Not converted 8-19.

Chiefs were not done yet and replied with 2 man well executed overlap on the left wing to dab down in the corner for their final score which was not converted 8-24.

The remaining 15 mins was all Cornwall as Chiefs struggled to contain the now rampant boys in black and gold. Chiefs received a yellow card for cynical play and the pressure mounted. Tyler Dower who continued his excellent first half performance inspired the Cornish with a 30m line break. This sustained Cornish attack ended with lock Jack Hoskin, with Mills latched on with a neat pick and go to score from short range, again not converted 13-24.

Mills who continued to frustrate the Chiefs at the breakdown winning 6 turnovers, meant that Kristian Davis could kick it deep into the corner for a lineout maul. Chiefs infringed again by collapsing the maul 2m out and having just had the yellow carded player back on the pitch had to send their prop to the bin. Cornwall opt to scrum which they won with ease and now with Chiefs lacking numbers out wide, Davis throws a 2 man miss pass into the welcoming arms of fullback Eddie Pearce who goes over for a well deserved final converted score to end a fine match 20-24.

The game started brightly with Cornwall hitting the ball up through double digit phases but being met with an equally competent Devon defence which was only ever going to end in 1 of 2 ways either with Devon conceding a break down penalty or the Cornwall lads knocking on. As it was Eddie Pearce (Cornwall) from full back running an excellent line but receiving an unsympathetic pass in challenging conditions failed to keep hold of the ball resulting in the first of 29 scrums in the match! It was clear from the off that on balance Cornwall had the edge in the scrum winning the first 2 Devon scrums and taking in all 3 against the head. Cornwall didn’t have it all their own way but only once did we get shoved backwards and we conceded 2 scrum penalties one in each half. Devon looked much more settled in the second half at the set piece but on balance the Cornish front row boys had a good day in the office.

With a strong westerly breeze, lineouts were always going to be difficult for the hookers and both sides suffered inconsistency and struggled to win clean ball. It was off such a line out 11mins into the game, on the Devon 22m line when a messy ball was gathered up at the back of the lineout by flanker Jack Mills (Cornwall) who span out of the first tackle, broke the next tackle and powered to the Devon line with a further 2 tacklers valiantly attempting to bring him down which they nearly achieved. Millsy wrestled the ball down for the first score of the match which Kristian Davis converted.

The first half finished 14-0 to the boys in black and gold.

The second half with the wind now abating but at the backs of the Cornish lads proved to be a much tighter affair, with Devon replenishing their ranks with plenty of fresh legs and as a result the Devon intensity noticeably increased as the some of the Cornish lads started to slow up. That said it was again another Saltash player Kristian Davis who opened the scoring with a great individual skill in broken open field play, spotting that the Devon defence was not organised and there was a mismatch on. Kristian pinned his ears back and accelerated into the space from 30m out and breaking the line with only the Devon fullback Brandon Bonser to beat which he did with a nice side step to leave Bonser on the deck with Davis dotting down under the posts. Davis converted his own try 21-0

Devon were far from done and very much wrestled control of the game back from Cornwall and replied through 2 scores of their own, each time through breaking a tackle or a missed tackle from Cornwall. However they only converted 1 of their scores with fullback Brandon Bonser failing to convert a challenging kick in the swirling wind and rain 15m off the right touchline. 21-12

These scores seemed to galvanise Cornwall once more and for the remaining 10mins Cornwall camped in the opposition half. Kit May the Cornish 13 with another trade mark cross field kick found winger Callum Preece who athletically jumped and took the ball on the full in the far right channel, darting in field with a 30m sprint with flanker Mills in close support. Preece looked good for the score but the Devon scramble defence was excellent and he was hauled down 1m short of the line and he was unable to get the offload to Mills away. Millsy was on station to duly secure the ball with Freddie Davies picking off the base to go over only to be held up over the line. This was the last real opportunity for either side to register points with Cornwall seeing out the match in Devon’s half to take a well deserved win.

Many thanks goes to CRRS for supplying the match official team who did an excellent job. 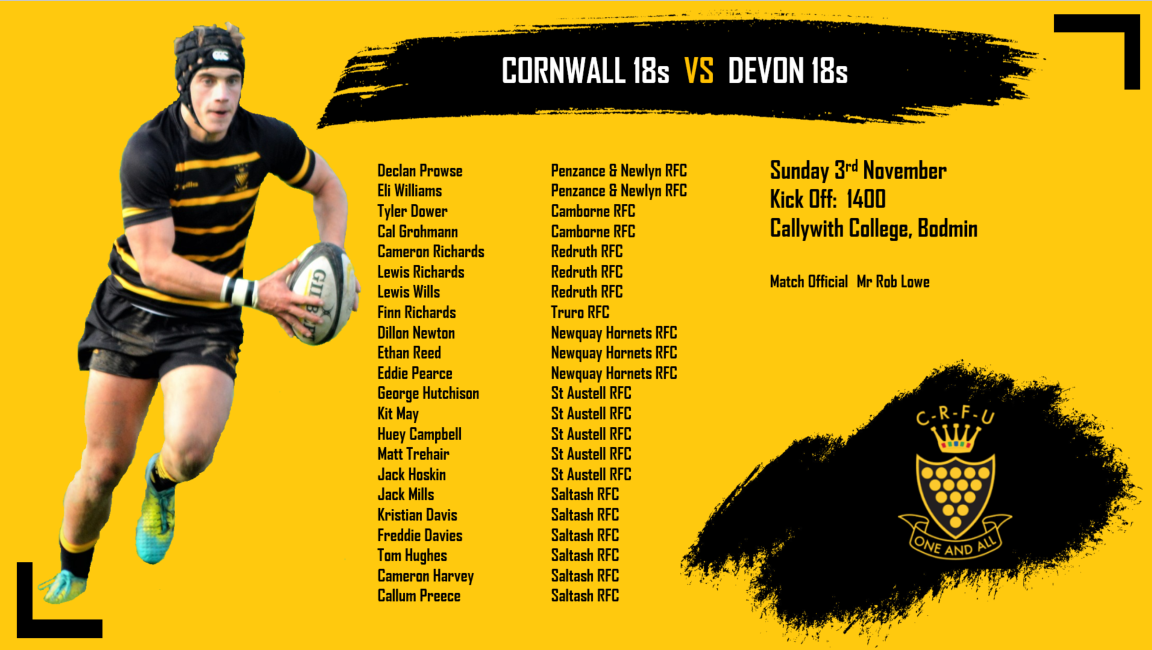 Any fixture between Cornwall & Devon has a competitive edge to it and you can be sure that this Sunday’s Under 18 game at Callywith College, Bodmin will be no different.

Both sides are preparing for this season’s south west championship in December. The Cornwall squad is listed above. Kick-off is 2 pm.