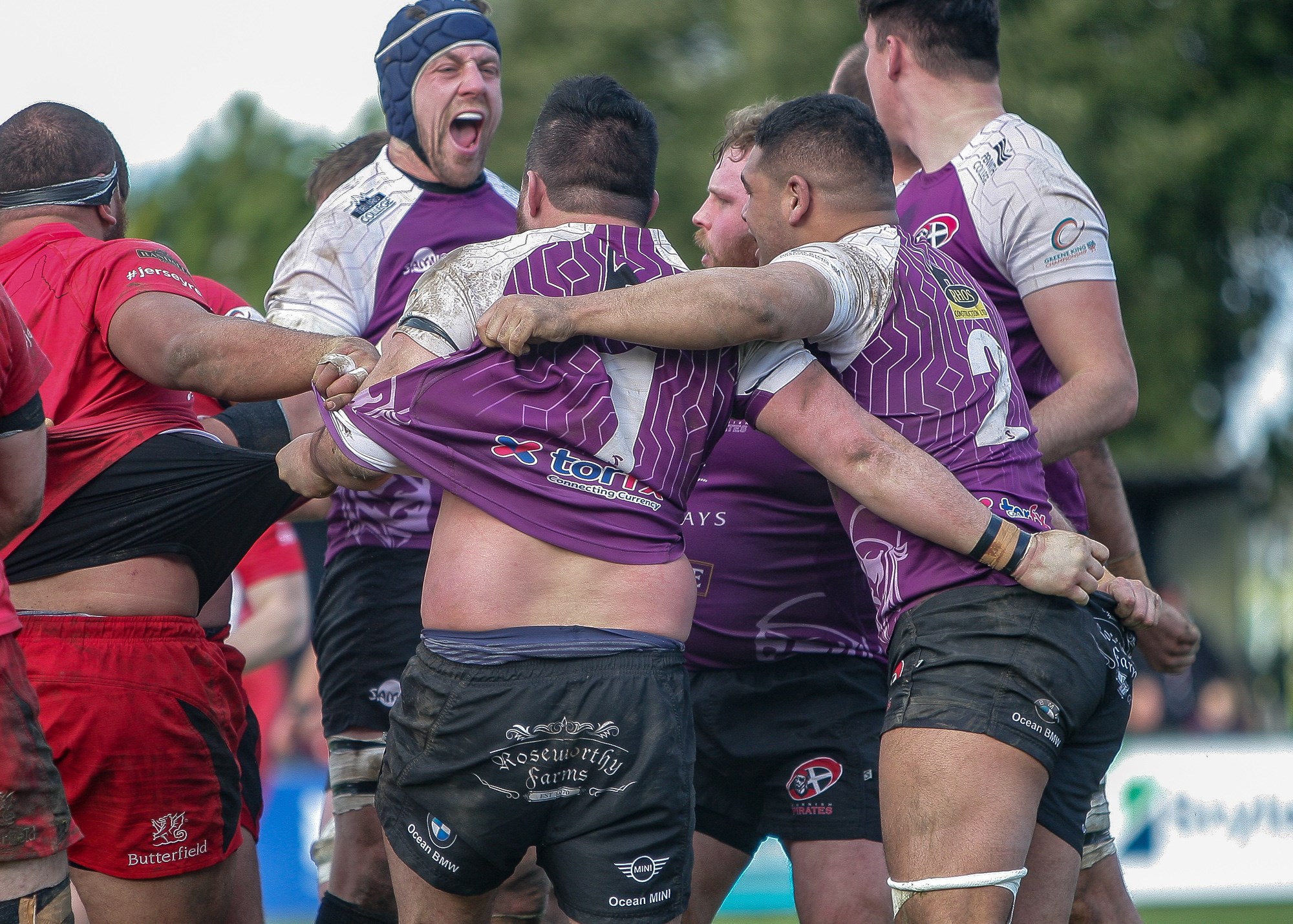 During a period of less than kind weather conditions, having negotiated their road and air travel safely to Jersey, for the Cornish Pirates the outcome of this Championship Cup quarter-final tie proved oh so worthy.  A late try scored by replacement Dan Koster and converted by fly-half Javier Rojas Alvarez secured the victory, the result one which in all honesty few would have predicted.

Not only had the Pirates succumbed to a 33-10 league match defeat at the Jersey team’s Stade Santander International ground in October, but it was a venue where they have only ever won twice previously, their last success a 24-0 British & Irish Cup match victory in December 2013.

The Cornish side was, of course, fully aware that a tough challenge was in prospect, but this was also clearly one that they were up for.

Selection for the match saw the same starting backs as had appeared in the last two outings, whilst in the forwards Toby Freeman was named on the flank with Dan Lee switching to No. 8. Having recovered from a slight injury picked up in training last week, which followed his return from a loan spell at Saracens, for prop Christian Judge it was a seat on the bench.

On a sunny, but also cold and windy afternoon there was no lack of positivity at the start of the match, scrum-half Alex Day busy for the Pirates and full-back Kyle Moyle unfortunate to lose his footing when taking off on a run. Then, when Jersey Reds were awarded a penalty and full-back Brett Herron posted the ball to touch, a position was set for the hosts to seriously threaten. An initial probe was held, however when the Reds had a ‘put in’ just five metres out it was scrum-half Will Homer’s long pass that found the hands of wing Leroy Van Dam. There was welcome enough space for him to cross out wide on the left. It was a well taken score that was also well converted by a Cornishman and former Pirate in the shape of fly-half Aaron Penberthy.

There was disruption soon after in the Pirates ranks when wing Alex O’Meara and then prop Tom Concu departed, the pair replaced by young AJ Cant and Christian Judge, whilst there was also concern that the line-out was functioning less than smoothly, not helped of course for either side on the day because of the wind.

When a series of penalty awards directed Jersey’s way, it also gifted them further realistic opportunities to score. Thankfully, however, although tested the Pirates did well to defend their line. and they then won an important turnover to gain welcome relief.

Managing some go forward near the end of the half, through the efforts of a rampaging Dan Lee and centre Rory Parata it was the Pirates turn to apply a little pressure. A driving maul also raised morale, as did in the very last minute of the half a penalty awarded at scrum time. With an opportunity to get points on the board, skipper Brett Beukeboom decided to call forward fly-half Javier Rojas Alvarez, whose successful strike made it 7-3 at the break.

In this absorbingly competitive contest, when play resumed it continued to be closely fought, there little to choose between the two sides. However, approaching the hour mark a penalty opportunity slotted by Penberthy opened up a seven points gap, but with there still clearly all to play for.

Shortly after the restart, a penalty kick to touch provided a chance for the Pirates to hit back, and they did just that. A driving maul gained real momentum and when the ball was released both Parata and Rojas Alvarez went close. Referee Mr. Ridley signalled penalty advantage to the visitors, but they didn’t need it as Freeman’s converted try drew the scores level.

Another penalty was soon awarded the Pirates, and this time it was Moyle who was called upon to attempt the kick at goal. It was from some distance out, but in the context of the match was well worth an attempt, even though it missed.

A next long-range attempt went to Penberthy, it one with wind advantage. It was felt a potentially huge moment in the game, possibly a deciding one, and the cheers from the crowd confirmed that it was successful.

There was no way this Pirates team would slacken off, and showing immense character there was firstly a run from Rojas Alvarez which kept hopes alive and then a scrum that offered promise. With the ball released perhaps quicker than the defending Reds had expected, it was suddenly in the hands of replacement Dan Koster who flew over the line for an all-important converted score.

The Pirates had to show further character to thwart their opponents at the very end, both at maul time and when Jersey’s No. 8 Janco Venter ran menacingly, but to their enormous credit they held out to record this super 17-13 Cup tie win.

A semi-final place now beckons, details to be confirmed. For the immediate present it was time to enjoy the moment and also follow the fortunes of Pirates-bred England internationals Jack Nowell and Luke Cowan-Dickie in Dublin, to see if another surprise would materialise – and it did!

Speaking after the Cornish Pirates successful afternoon’s work, co-coach Alan Paver said.“The game was a good arm wrestle with both sides very competitive and even on the day.

“They were hurt come the final whistle, as we were when losing at the end against Coventry in the league recently, but we needed this result. Our track record in Jersey hasn’t been good, so to emerge from what was certain to be a tough battle and get over the line with a win is a big mental plus for us”.

Alan added.“We always take Cup matches seriously as it important for the club and our supporters. You could tell the reaction of the guys at the final whistle, they were over the moon to get through at the end.”