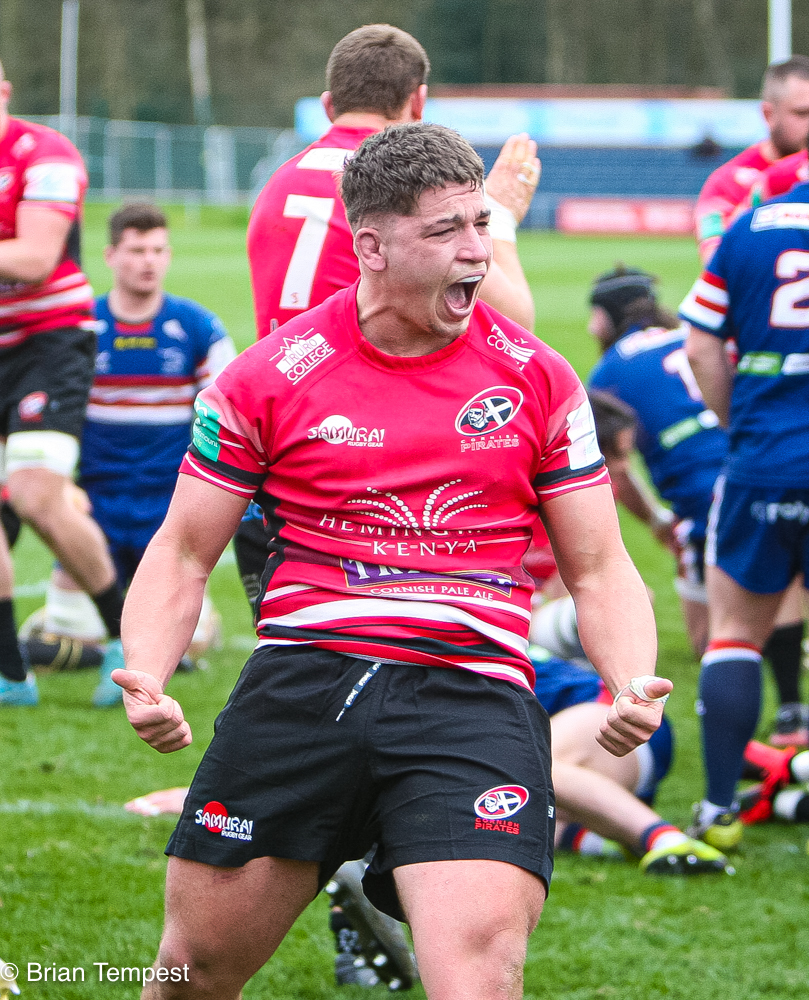 Travelling ‘Up North’ for this Round 4 game in this season’s Greene King IPA Championship, the Cornish Pirates expected a tough examination against Doncaster Knights at Castle Park, as both sides arrived at this stage of the campaign each with three wins under their belts.

And the outcome? Well, in what was expected to be closely fought contest, it was the home side who emerged narrow winners, a late penalty from fly-half Sam Olver proving decisive.

Following knocks picked up in the home win against Bedford Blues, neither fly-half Luke Scully or wing Robin Wedlake were available for this encounter. Will Cargill was selected to wear the number 10 shirt, Maliq Holden moved from 15 to wing and Tommy Wyatt, who has impressed thus far with his appearances off the bench, was ready to make his first start at full-back. At inside centre there was a welcome return from injury for club captain Nicolas De Battista, who replaced the previous week’s man-of-the-match and named replacement Shae Tucker.

In the pack, Fa’atiga Lemalu returned to the starting XV to partner Danny Cutmore in the second row, Josh Caulfield dropped back into the blindside flanker berth and John Stevens switched to the openside in place of Antonio Kiri Kiri, who was named on the bench.

Play underway in dry but at times blustery conditions, the Pirates were soon down to 14 men after referee Mr. Woodthorpe showed ‘yellow’ to flanker Josh Caulfield for making an adjudged dangerous tackle. Also adding to the frustration, the Knights were quick to benefit from early numerical advantage when from a driving maul flanker John Kelly suddenly strode unopposed to the line for a try converted by Olver.

Appearing to settle into mode, playing towards the clubhouse end of the ground, following a couple of penalty awards Cargill looped a fine pass right to No8 Tom Duncan who crossed out wide for an unconverted try.

As evenly contested as had been expected, both sides also made their share of mistakes. For Donny’s lock Jerry Sexton, brother of Ireland’s skipper Jonny Sexton, his led to him being shown a yellow card.

The Pirates unfortunately lost the services of the luckless De Battista, who was helped off with what looked like a lower leg injury, but they would at least shortly after take the lead. Making his 50th appearance for the club, hooker Dan Frost was his usual all action self, and after the Pirates drove strongly to the line, aided with a little extra weight from a couple of eager backs, the award of a penalty try was signalled. The Knights also went down to 13 men when No8 Guido Volpi was a third player in the match sent to the sin bin.

Neither team would lose the services of any further personnel before the break, and although both had opportunities to register further points, 7-12 is how it stayed.

A break made early in the second half by Knights’ scrum-half Guss Warr, who has played for Sale Sharks, raised alarm bells, but it was a well struck penalty from Cargill that nearing the hour mark would extend the Pirates lead.

The Knights would hit back when a spell of intense pressure ended with a converted try scored by centre Connor Edwards, and it was now very much ‘game on’.

Into the last quarter, crowd or no crowd, the tension was somewhat heightened, and despite far from being a classic it was no surprise that in the build up this contest was dubbed the Championship tie of the round.

Sadly, for the Pirates, in the dying minutes Olver’s penalty from in front of the posts would prove decisive, although there was still drama as Cargill, who had played well, saw his injury-time penalty effort narrowly miss. Wings Alex O’Meara and Maliq Holden also combined on mazey runs that provided last ditch hopes, but it wasn’t to be.

Come the final whistle it was case of credit due the still unbeaten Knights for having shown considerable steel to register their victory. Such a result was long overdue, as their last win against the Pirates was back in February 2016.

“Expecting a really tough test, that it exactly what we got. However we had opportunities and ultimately only have ourselves to blame.

“Unfortunately we forced things at times and went away from the game plan and we also weren’t able to convert at crucial times. Having said that, though, I have to say credit to Doncaster for staying in the fight and getting what they deserved.”

“Statistically our driving line out and our scrums are going well, plus we are being super physical, but there is a need to layer discipline into our play because it is an area that has let us down at times and our penalty count is far too high.

“Come the end we were naturally disappointed as it was in our hands and we had plenty of opportunities, but we just lacked composure and our accuracy when we attacked wasn’t quite where it needed to be.”