Ealing too strong for Pirates 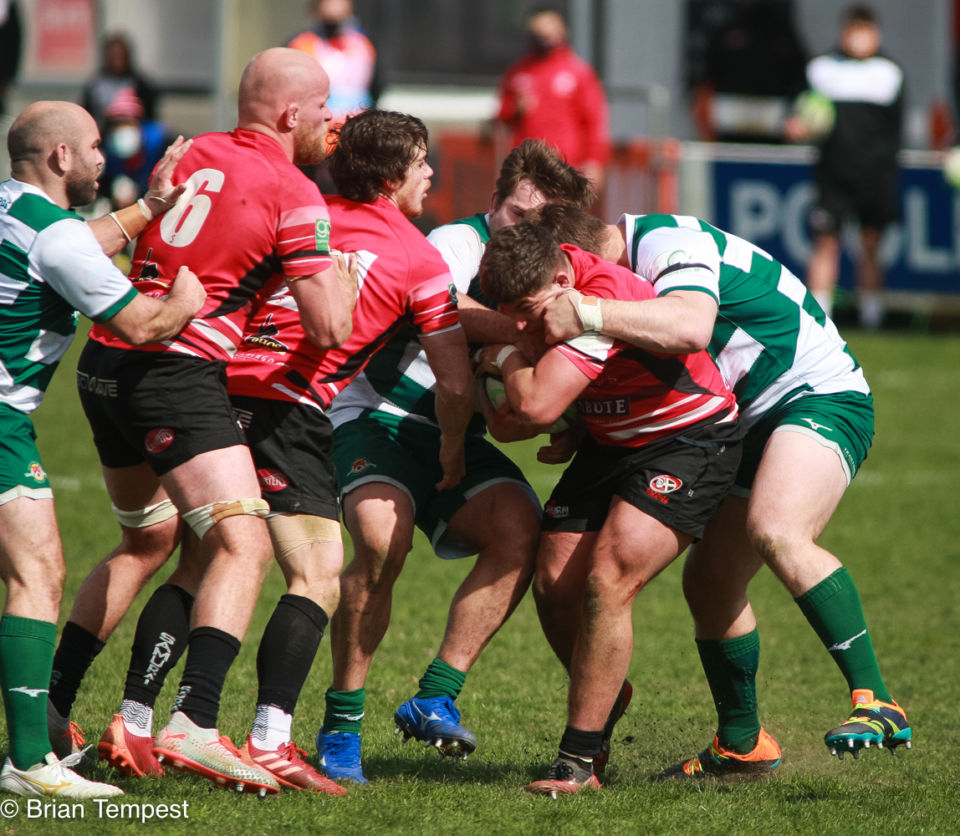 By Phil Westren, at the Mennaye Field.

It was said pre-match that unbeaten league leaders Ealing Trailfinders were the team to beat. So, when the Pirates got within two points of their visitors early in the second half, plus with wind advantage at their backs, they appeared surely in with a shout. Ultimately, however, soon losing two men to the sin bin would unfortunately prove costly.

Ahead of this hard-fought encounter the Pirates welcomed fly-half Luke Scully back from injury. Alex Schwarz was selected to partner him wearing the ‘9’ shirt and Antonio Kiri Kiri was named at ‘7’.

When the team emerged from the tunnel, lock Danny Cutmore and fit again wing Robin Wedlake led the side out, each set to make their 50th appearances for the team. Both sides then lined up with the match officials in front of the stand, ready to observe a two minute silence following the sad passing of Prince Philip, Duke of Edinburgh, on Friday.

As a mark of respect, the teams and match officials also wore black armbands and the club flags were flown at half-mast.

The Trailfinders opened the scoring in just the third minute, when one of their own celebrating a 50th appearance, prop Elliot Millar-Mills, drove over for a try at the old Western National corner. Fly-half Craig Willis added the extras.

In a match that was competitive and feisty, as the Pirates looked to make a quick response it was perhaps no surprise that ‘Sir’, referee Mr. Leal, stepped in to speak to both captains.

Line-out play was less than fluid and scrums were also not best functioning, however when the Ealing team once again threatened they too made mistakes, enabling the Pirates to relieve pressure.

There was a setback when, after a delay in play, Scully departed proceedings with a leg injury, though his replacement Will Cargill soon after slotted a well-struck penalty.

3-7 looked a likely half-time score, but after further pressure mounted by  the Trailfinders another try scored on the left, this time by wing James Cordy-Redden, made it 3-12 at the break.

Pumped up to start the second period, the Pirates began well. After Cargill put up an high up and under, two Ealing defenders were unable to control the bounce of the ball. Hooker Dan Frost gained possession, and offloading to Shae Tucker the centre scored a converted try to the left of the Newlyn posts. Willis had been one of the luckless defenders who in the process received an injury and had to be replaced.

It all looked very promising for the Pirates, but that would soon change, because after experiencing a relentless period of pressure, and an inevitable number of penalty awards, Cornish Pirates’ skipper Tom Duncan was sent to the sin bin, followed just three minutes later by Tucker.

The Trailfinders, with former ‘Pirate’ Max Bodilly operating at outside centre, were now on full throttle, resulting in a try scored at the clubhouse corner by wing Angus Kernohan and then one at the Penzance posts by flanker Kieran Murphy. Full-back David Johnston converted both.

Among the Pirates replacements was backrower Matt Bolwell, now proudly making his 100th appearance for the club. There was no lack of determination, with sore bodies a certainty after the game, however all the effort in the world could not prevent two more tries being scored by the visitors. The first was a converted effort by replacement scrum-half Jordan Burns, who has punished the Pirates with his try-scoring ability in the past, and the last was by another impressive replacement in hooker Shaun Malton.

The final result was yet another statement made by the Ealing team, but if the Pirates looked for solace at least they managed to prevent the Londoners making it past the 50 points mark for the first time this season. In all honesty, however, it is solace the Pirates simply would not have sought.

“Our discipline unfortunately let us down today and we gave away far too many penalties.

“We knew this game was going to be such a big one for our season so there was a lot of energy and emotions especially in the first 20 minutes, although it did settle down.

“Some fifty fifties didn’t go our way but we have to take that result on the chin, return to the drawing board and learn from it to come back much stronger.

“We are a tight, proud and hardworking group who care about each other, so to lose by such a margin does and should hurt. It is disappointing and upsetting and will hurt tonight and tomorrow but come Monday we must put it behind us and prep for Nottingham away next weekend. Our aim must be to achieve five points league points from each of our remaining games and then see where we are at the end of the season.”