Cornwall Under 20s name side to face Navy 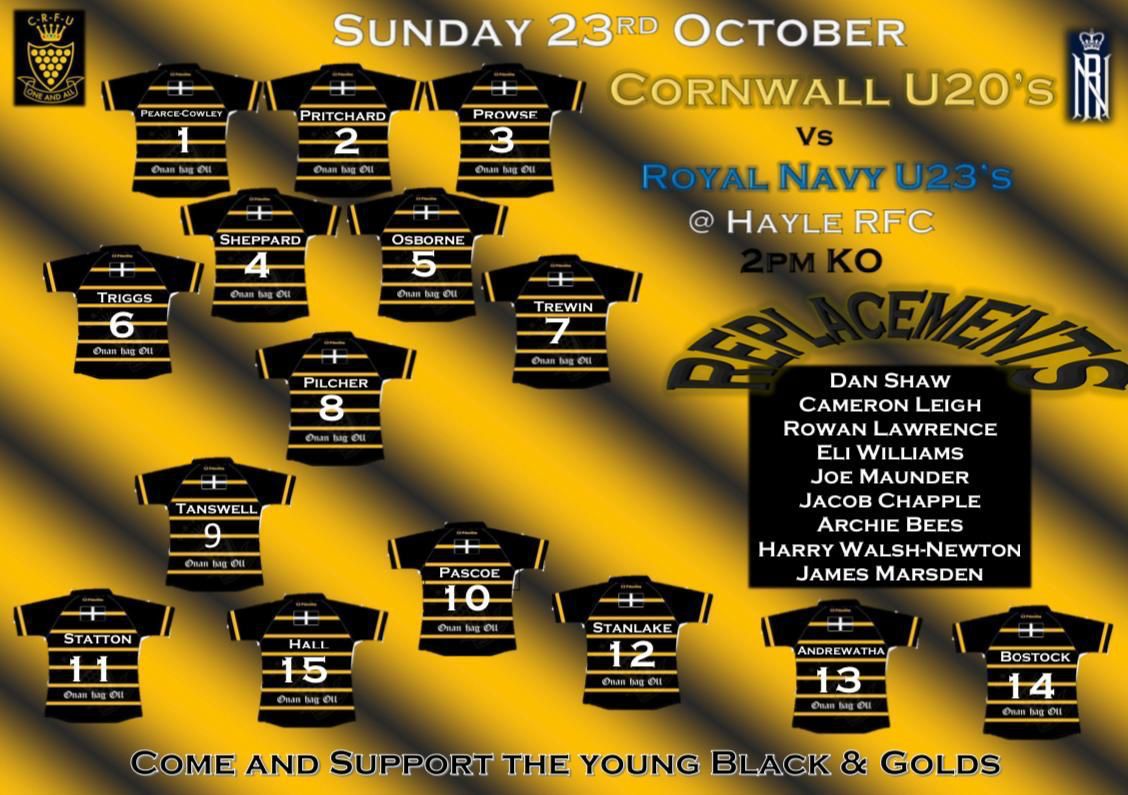 Sunday 23 October @ Hayle RFC with a 1400 KO time Cornwall Rugby Football Union (CRFU) are delighted to confirm the teams for their match v the Royal Navy U23, on Sunday 23 October at Hayle RFC with a 1400 kick off time.
As the U20 County championship campaign will not commence until early in 2023, the Cornwall team will consist of several players who played in the final at Worcester Warriors back in May.
CRFU President John Sumnall said “It is great to get this year’s county rugby kicked off with this prestigious fixture against the Royal Navy U23. We thank everyone at Hayle RFC for hosting us
and allowing us to use their facilities. We also thank all our sponsors for their support and assistance with this group of players in this important game representing Cornwall. It is fantastic to see so many different clubs represented, and we thank them for their support to enable this fixture to be played”
Cornwall have named Ethan Pearce-Cowley (Plymouth Albion) as the captain for the game, alongside him is Pirates Ams Toby Osborne who is the vice-captain.

Cornwall coach Rich Kevern said – “This will be a massive test for this set of young players, some have experience from last season whilst others have come into the squad from scratch. With the change in dates for the Jason Leonard Cup, we will not start training for the new season until the New Year, so we need to blow away the cobweb’s early doors, against an older age group team, and one who have already been training together.”
Cornwall has maintained the same coaching set again with Tyler Gendall, Brad Howe coaching the forwards and Adam Kevern and Richie Kevern coaching the backs.

Owen Salmon Royal Navy U23 ADoR said, – The Royal Navy U23’s are excited to travel to Kernow to play Cornwall U20’s in what is expected to be a very competitive fixture in the build up to this season’s Inter-service Competition. There has been a long and proud history between the 2 clubs, this game presents a great opportunity to renew those links and look to the future. With RNAS Culdrose located in Helston, there have been many Navy players who have represented Cornwall, indeed current RN U23 coach Ben
Priddey pulled on the black and gold jersey for last season’s winning County Championship side. The Navy know they will face a tough young Cornish side but are looking forward to the challenge.”
Cornwall U20 preparations for the new season are well in hand, with training planned for Sunday mornings at Truro College between 1000 –1200 starting in the New Year. An extended squad list is being complied and if you are eligible and want to be considered then please contact the team manager in the first instance.

Criteria: – must be over 18 before training or playing, under 20 years of age on the 1 September 2022,
registered for a Cornwall Club, born, or are living in Cornwall, or represented Cornwall at a younger age group.
The CRFU Chair Dave Saunter said, -” This has the makings of a very exciting game between two young age group teams. It would be great if we can get good support for them on Sunday afternoon at
the memorial ground at Hayle RFC”
Entry fee on the day will be £2 on the gate, with Under 16’s entering free.
There will be marketing and sponsorship opportunities with the Under 20’s team and matches, any individuals or companies that may be interested are asked to contact Colin Hatch in the first instance.