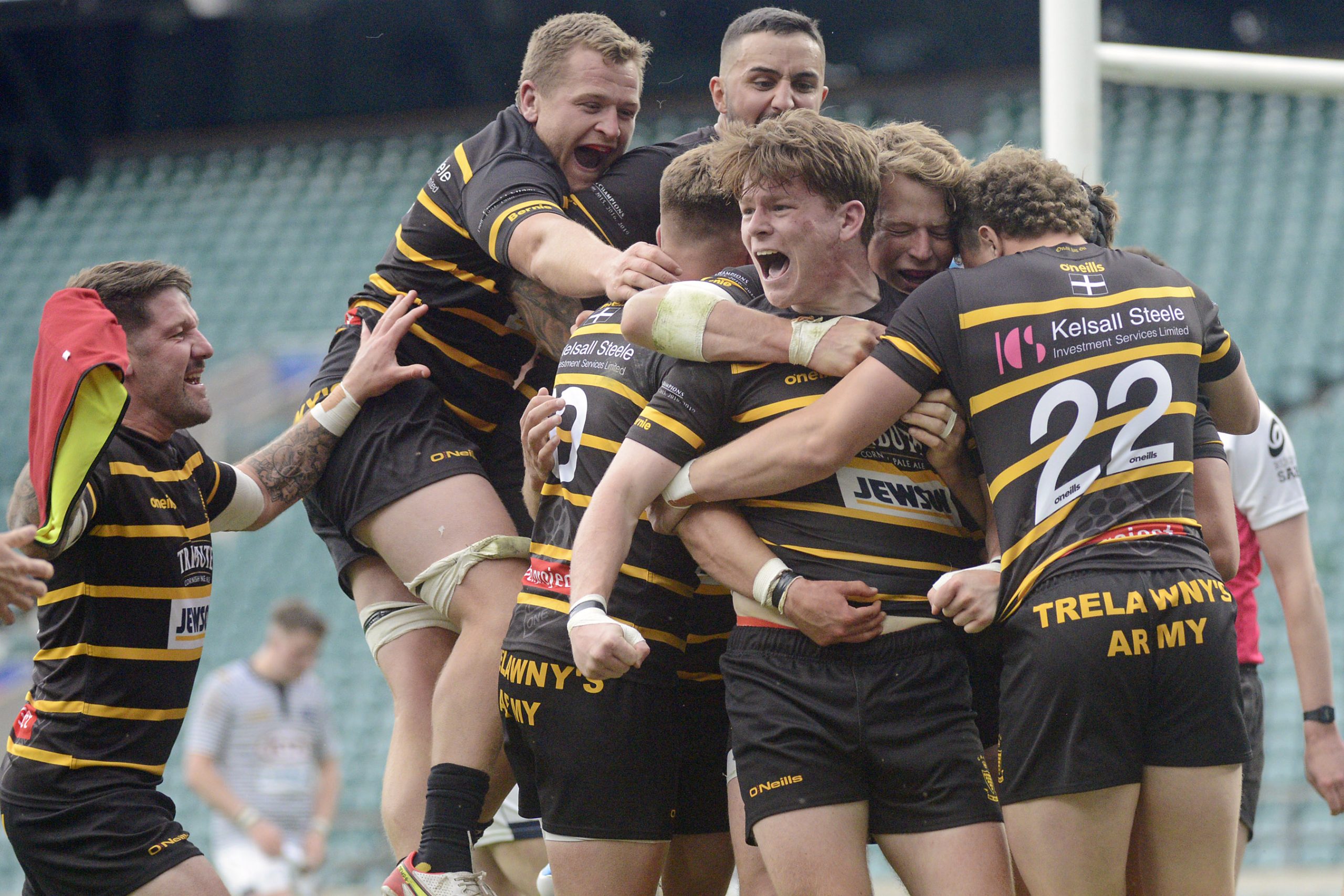 By Bill Hooper at Twickenham Stadium

Cornwall retained the Bill Beaumont Cup to cap an unprecedented season that sees them hold three county cup titles from their representative sides. For the Black and Golds this was a 7th Championship title.

Prior to kick-off there was a minute’s applause for Bernie Shepherd, Matt Shepherd’s father who sadly passed away shortly after the Hertfordshire game. There were thoughts also for former Cornwall player Neil Douch who passed away this week. Also it was a poignant moment to remember Dave “Benji” Thomas, on this of all days.

Roared on by Trelawny’s Army, Cornwall kicked off and within a minute had opened the scoring. The Black and Golds secured the ball with fly-half Fraser Honey firing out a long pass to Alex Ducker, the winger slipped the ball to his full-back Will Trewin, who still had work to do, but he scored in the corner, with Honey adding the touchline conversion.

Soon Cornwall cut loose again, centre Duncan Tout carved through the centre with his partner Jack Simmons in support, an inside ball to Jack Oulton saw the scrum-half in under the posts, no trouble for Honey with the extras and Cornwall were in dreamland.

Cheshire re-grouped and put Cornwall under long periods of pressure but once again the Cornish defence proved up to the mark.

The Cornwall back row of skipper Kyle Marriott, Sam Stevens and Ben Fox were getting through a lot of hard work at the breakdown, whilst at the coalface props Tommy Phillips, Jess Tompsett along with hooker Ben Priddey battled hard against the formidable Cheshire front three.

Honey missed with a penalty kick attempt but he was back on song to convert Cornwall’s third try, great work from the forwards saw hooker Ben Priddey in space, his pass to Oulton put him in at the corner scoring with aplomb.

Cheshire ended the half knocking on the Cornwall door, as the penalty count against the black and gold mounted with Trewin taking a yellow for the team.

The men from the North got their reward early in the second half when their captain No.8 Josiah Dickinson powered over for the first of his three tries, James Robbins added the conversion.

The same combination doubled the Cheshire tally soon after as they began to creep closer to Cornwall on the scoreboard, the black and Golds lost Simmons to the sin-bin, now was the time for the supporters to get behind the team. Nerves were soothed as Honey kicked a penalty to nudge Cornwall two scores ahead, but that was short-lived as Cheshire’s wing Tom Walsh exploited an overlap to score an unconverted try in the corner.

Good work from replacement scrum-half Mikey Austin and wing Alex Ducker brought another penalty for Cornwall in front of the posts, which Honey slotted.

It was all set for a dramatic finale, Dickinson got his third try from a catch and drive, crucially unconverted, before another Tout snipe set up a penalty for Honey that gave Cornwall a six point buffer.

With the game in the final minute and the Cornish crowd nervously awaiting the final whistle, skipper Kyle Marriott broke from a scrum on his twenty-two and found Austin, who went through the gears right up the middle of the pitch, eluding some desperate Cheshire tackles, his momentum took him to the line to confirm Cornwall’s win with Honey administering the coup de grace sending the Cornish supporters into full party mode.

After the game Cornwall assistant coach Marek Churcher was delighted with his side’s performance. “We weren’t complacent after our fast start, we knew this Cheshire side would come back strongly and ask us questions, but I was pleased with the way we managed the game and took our opportunities to keep our noses ahead. “