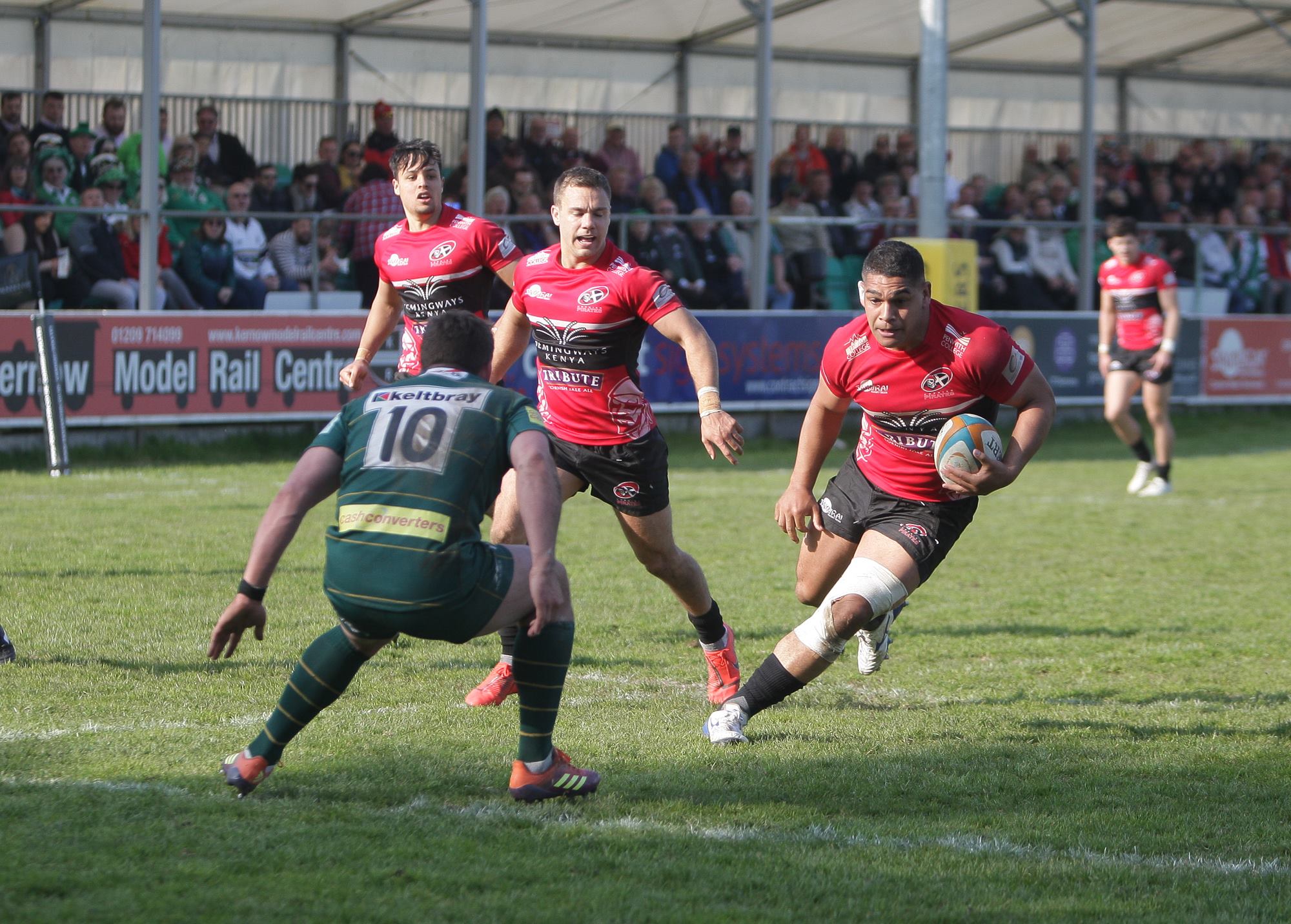 Despite the Cornish Pirates playing with a truly commendable spirit throughout, five tries from London Irish, all converted by Ireland international Ian Keatley, saw the visitors to victory, reports Phil Westren.

The teams had already played each other three times this season, the Pirates in their last meeting recording a first ever win against London Irish, which back in mid-December had delivered a perfect Christmas present. Following that loss, it was always likely that ‘Irish’ would seek their revenge, with the added incentive of striving to hone towards almost certain promotion at the business end of the season.

The Pirates made three changes in their starting line-up from the one that ran out at Bedford the previous weekend. AJ Cant slotted in on the left wing and in the front-row Sam Matavesi was named at hooker and Jack Owlett at tight-head prop.

The visit of London Irish, combined with that of the Falmouth Marine Band plus sunny weather, helped create a real pre-match buzz about the ‘Mennaye’, and it one certainly enjoyed by both sets of supporters.

After a lively start from the competing teams, it was London Irish who opened their account in the twelfth minute with a try scored at the old Western National corner by centre Tom Stephenson. Fly-half Keatley followed up with the first of his five conversions slotted in the match.

In the period that followed the visitors dominated possession, ending with Stephenson making it over the line again for a second converted score.

Conditions were, of course, much better than Irish had experienced on their last visit to Penzance, and fielding a side littered with international performers there were threats aplenty for the Pirates to contend with.

There was credit due the Cornish team for efforts made in also striving to launch attacks. Centre Rory Parata and wing Robin Wedlake were to the fore, alongside willing ball carriers in hooker Sam Matavesi and flankers Josh Caulfield and Matt Bolwell. The Pirates line-out also functioned well, as did their scrum which was holding up commendably well against larger opponents. Despite these positives, however, it was the defensive determination and line speed display of their opponents that was mightily impressive. Indeed, here was a squad that had arrived fully focused, their collective will to deliver at a level this particular scribe has seldom witnessed.

After Pirates’ centre Javier Rojas Alvarez was luckless with a penalty attempt on 32 minutes, just before the break the visitors extended their lead when a run from Luke McLean was given support by scrum-half Ben Meehan who scored a converted try to the left of the Newlyn posts.

London Irish proceeded to notch a bonus point just four minutes into the second half, it the turn of right-wing Ben Loader to get his name on the scoresheet. Making a counter-attack from some 40 metres out, in what seemed just a flash he dotted the ball down at the Penzance posts, with Keatley’s fourth conversion making it 0-28.

Showing resolve, the Pirates maintained their effort and boosted by fresh legs gained ultimate reward. After pressing close to the line, it appeared that London Irish were about to clear the danger, only for Matavesi to pounce and score a try converted by Rojas Alvarez.

Now was a period when the Pirates looked in control and pressing for a second score wing Cant was unlucky not to gather and make it over on the left. It felt that their efforts were deserving of further points, but it was not to be, Meehan’s second try of the match, again converted, delivering for London Irish their keenly sought-after victory.

Speaking after the game, Cornish Pirates’ co-coach Gavin Cattle had praise both for London Irish and his own team. He commented.“We have to commend London Irish for a complete professional performance. They made us work for everything and controlled field position, especially with the breeze advantage in the first half.

“Looking at how we played, there were certainly positives to take from the match. Our discipline was improved and sticking in the fight we reacted well from our defeat at Bedford.

“There are a few battered bodies and seeing the effort put in every week I’m just proud of the boys. Today was a case that at times you just have to tip your hat to a better team.”