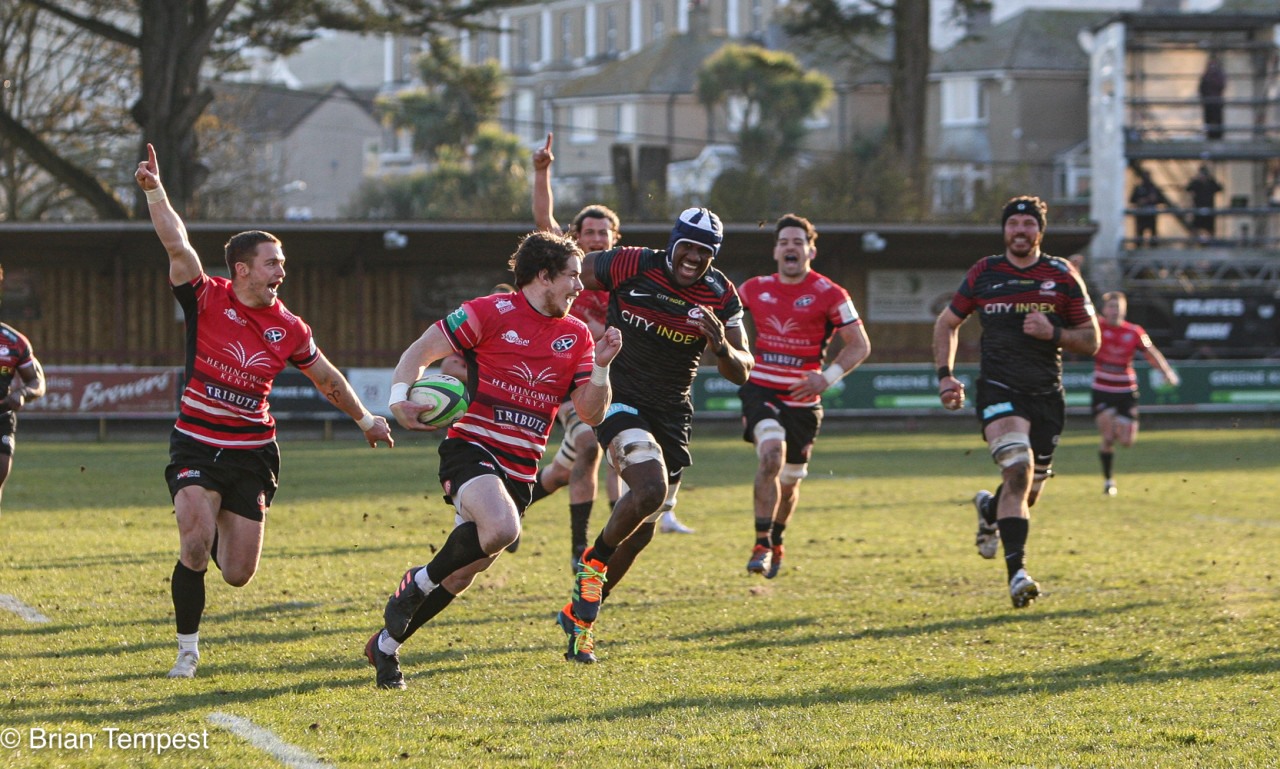 This contest saw the Cornish Pirates welcome Saracens, for the first time since 2003, to Penzance for their opening game in this season’s belated Greene King IPA Championship, reports Phil Westren from the Mennaye Field

Pre-match Jackson Wray, the visitors’ skipper, said his side was primed and ready to resist anything about to be thrown at them as they began their intended march back to the Premiership. At the same time, he didn’t expect anyone to do them any favours, and with regard to this particular Sea Warriors versus Desert Warriors contest he was absolutely right.

The Cornish Pirates fully deserved this win against their illustrious  opponents, it a terrific performance and a reminder to the RFU and Premiership Rugby that there is indeed true worth below the perceived elite.

On a wonderfully sunny spring day, before kick-off of this first competitive game at home since last March, sincere appreciation and thanks were expressed via the tannoy system to the NHS and to Key Workers for all they have done in the past 12 months. Then, during an impeccably observed minute’s silence, everyone stood to remember so many who have sadly passed away, including especially former players and supporters.

It was inevitably frustrating for the Cornish Pirates that they were missing the services of recently named club captain Nicolas De Battista and Callum Patterson, both of whom had picked up injuries just ahead of the match. Also, after Saracens applied early pressure and opened the scoring with an unconverted try from Scotland winger Sean Maitland, for many pre-match thoughts were likely reaffirmed that the ultimate outcome of this one was simply inevitable. Nobody, however, told the Pirates of such a script.

Penalties were conceded and the Pirates were tested looking into the glare of the sun under the high ball, but following good forays by lock Fa’atiga Lemalu, prop Marlen Walker and centre Shae Tucker, pressure created led to a kick at goal penalty opportunity for Luke Scully. With a quarter of an hour on the clock the young fly-half stepped forward and duly delivered.

Play was pretty evenly contested at this stage and, as had been expected, it was certainly very physical.

Into the second quarter Pirates’ hooker Dan Frost made a strong carry before skipper Tom Duncan maintained the forward advance and crashed over the line for an unconverted try scored to the right of the Newlyn posts.

The home scrum was quite sound at this stage and the line-out functioning particularly well with Lemalu and his young second-row partner Danny Cutmore leaping high. However, after Saracens hit back with another unconverted try, this time scored by wing Alex Lewington at the clubhouse corner, it was the visitors who held a 10-8 lead at the break.

With the Cornish flag flying high at the Mennaye post St. Piran’s Day, the county’s patron saint will have admired the effort and spirit so far displayed, and with just two points separating the sides the Pirates were very much still in the match.

For the start of the second period, after ‘Sandstorm’ blasted the arrival of the home team back on the field it was not long before the Pirates nudged ahead with a try scored by flanker Josh Caulfield, with Scully adding the conversion. Sarries, though, all but immediately bounced back to regain the lead when lock Tim Swinson scored a try which was converted by Vunipola.

For the Pirates the line-out was still functioning well, whilst at scrum time all but total dominance was amazingly now displayed. Indeed, awarded a scrum penalty 34 metres out, it was the boot of Scully who on 64 minutes fired his kick high between the Penzance posts to give the home team a one-point lead.

The effort of the whole Pirates side was to be admired, and with bloodied man-of-the-match flanker John Stevens perhaps deserving special praise, even without a crowd present an atmosphere was created whereby thoughts were that the Pirates side had it in them to record an historic victory.

Both sides introduced replacements, but with members called off the Pirates bench having the most impact. Young wing Tommy Wyatt continued to uphold the Pirates effort with a fantastic kick and chase, and the result was ultimately put behind doubt when scrum-half Rhodri Davies plucked a bouncing ball to run clear and score. Scully’s conversion opened up an important eight points gap, which is how it stayed for the final score to read 25-17.

It was such a shame that Covid restrictions meant supporters were not able to watch the match live, however those viewing it about the world on computer and television screens, or listening to BBC Radio Cornwall, will have been ecstatic – and deservedly none more so that Dicky Evans from his home in Kenya. This, without doubt, was arguably the team’s greatest ever result.

At least members of the national media were present, and they were impressed. In normal times we could all have celebrated with a good old singsong post-match with Cadgwith Singers, all for the present on hold.

The game had been a super advert for Championship rugby and looking for a highlight comment none was better than ‘The Observer’ correspondent Rob Kitson’s, when he said that Saracens had Vincent Koch, a prop with a World Cup winner’s medal, but their front-row was suddenly being shoved backwards by a front row sponsored partly by a local sweet shop! Hey, well done Jay Tyack, and thanks Freddie’s Proper Sweets.

Joint head coach Alan Paver, who was man-of-the-match when Saracens last visited the ‘Mennaye’ back in 2003, was a happy man after the game, commenting:

“This game was I feel an iconic moment – special. I am so pleased for the lads because the Covid period has been tough.  We said though that we were going to bring meaning to the season, so to achieve that result today provides a special moment.

“It was such a pity we missed a full house shouting their heads off, but we know they were here in spirit and I hope they feel pride in what we managed to achieve.

“The game was very physical, with heavy duty scrums and mauls, and I really enjoyed witnessing it. Facing such quality, having got the players ready for the league and them having worked so hard, for them to dominate in areas seen was fantastic.”

To conclude, in my mind it is time the RFU and Premiership Rugby had a rethink. We all accept that finance is important to the game and at the top it is a business – however it is first and foremost sport and it is sporting values that should always be upheld. Anything less would be/is a disservice to the game of rugby football.