Cornwall under 20s forced into changes for Devon clash 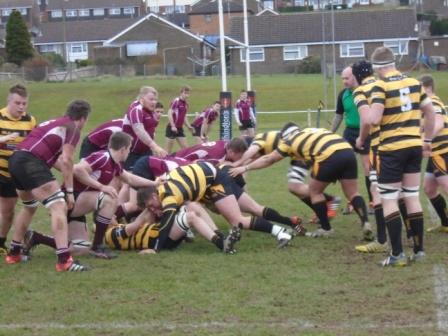 Cornwall go into their final pool game against Devon in this season’s Under 20 County Championship knowing that only a win will do, reports Bill Hooper.

Sadly, neither side are in the running for the quarter-finals this season, having both featured last season, but with relegation having been brought in this year the loser of this game will be demoted to a lower level next season and neither county will relish that prospect.

The Camborne club has eight of its players in the squad which is bound to ensure keen interest in the game from the local support.

CRFU President Ken Plummer said, “This will be another test for these young guys; both Cornwall and Devon have lost their opening games and the loser of this game will be relegated. Having watched them at Redingensians and Cinderford I know they have the spirit and ability to put in a good performance and get a result!”

Cornwall have been forced into changes for this vital fixture, having lost both starting props from the game against Gloucestershire (Tommy Phillips and Curtis Reynolds) to injury.

“We have suffered greatly with injuries this season and unfortunately we lost both of last week’s starting props with Tommy Phillips picking up a hand injury and Curtis Reynolds picking up a shoulder injury,” remarked coach Mike Rawlings.

Camborne’s Tommy-Lee Southworth reverts to the loose-head side, whilst Penryn’s Ryan Burley starts at tight-head with another local lad Luke Trewhella getting a first call up at this level.

Elsewhere, there is a welcome return for Locryn Williams in the back row, excellent in the game at Berkshire, with Town’s Angus Brown moving up into the second row to partner Redruth’s Luke Hattam.

Coach Bryn Jenkin said: “The result against Gloucestershire was disappointing, where we made some silly mistakes, missed a few tackles and they rightly took advantage. On the day they deserved the win and will fight it out with Berkshire as to who has the home quarter-final.”

Other changes are in the back-line with Dan Jane (St Austell) coming in at scrum-half, whilst Redruth’s Dan Rutter moves to fly-half in place of fellow Red James MacFarlane, who moves out to inside centre.

On the bench there is a call up for Camborne’s exciting young prospect Cameron Sayer, as there is for St. Austell’s back rower Will Gilder. It’s also good to see that Redruth’s Adam Smith has recovered from the illness that saw him laid up in hospital for a couple of days following the game at Cinderford.

The U20 team manager Chris Lea said: “It is real shame after reaching the semi-finals last season to be in a relegation battle this season. That is the vagaries of U20 rugby when we lose up to 50% of our squad every year through age qualification. There are a number of these guys who will be around next season and we will be looking at new talent who can come into the squad next season.”