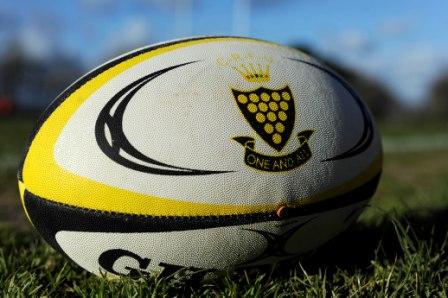 Despite a valiant fight back in the last ten minutes the young “Black & Golds” went down 25-19 to a well organised Hampshire side who sealed the group with their third victory of the campaign. Gloucestershire’s victory over Berkshire meant the end of the road for this season’s campaign for Cornwall who finished third in the group.

Cornwall were well supported at Overton RFC who ply their trade in Hampshire II (Level 10 of the rugby pyramid). It was a strange setting for county rugby at the end of what appeared to be a lengthy farm track on a steeply sloping pitch. Apparently, Hampshire Under 20s love it there and they were certainly quickly out of the blocks looking well fired up for the encounter.

Playing up the hill with a strong breeze at their backs the hosts opened the scoring after five minutes with a forty-five-metre penalty from centre Matt Evenhand. Ten minutes later left wing James Wise showed electrifying pace to exploit the space vacated whilst Cornish full back Toby Robinson was off the field for a head injury assessment. His touch down in the corner went unconverted.

With five minutes of the first period remaining the visitors set up a promising attack on the Hampshire line but the ball was turned over and kicked up field culminating in a try for full back Adam Musa. Evenhand added the extras to give Hampshire a 15 – 0 lead at the break.

Despite having the advantage of the wind for the second half the steep slope appeared to give the visitors a mountain to climb both metaphorically and literally and despite a try-saving tackle by Robinson it seemed all over when Jerome Rudder and Cameron Smith combined for Smith to touch down for an unconverted try which extended the Hampshire lead to 20 – 0.

Cornwall dug deep with centre Declan Matthews carrying well and a period of sustained pressure saw the visitors open their account with a Jack Osborne try converted by Fraser Honey fifteen minutes into the second half.

The “Black & Golds” continued to press but ten minutes later Hampshire’s flying left wing, Wise, used his pace once again to cross in the corner for the home side’s bonus point try.

The final ten minutes saw the Cornish boys show real character as they stormed forward to set up a try for Cameron Sayer. Honey’s conversion attempt went wide but with the deficit reduced to thirteen points the visitors sensed that an upset was possible and threw everything at Hampshire. An excellent backs move led to a Robinson try converted by Honey.

With four minutes remaining and only one score separating the sides Cornwall kept the ball alive and pressed hard but the Hampshire defence held on to secure their quarter-final berth.