Home › Bill's Blog › Pirates round off season with narrow loss

Pirates round off season with narrow loss 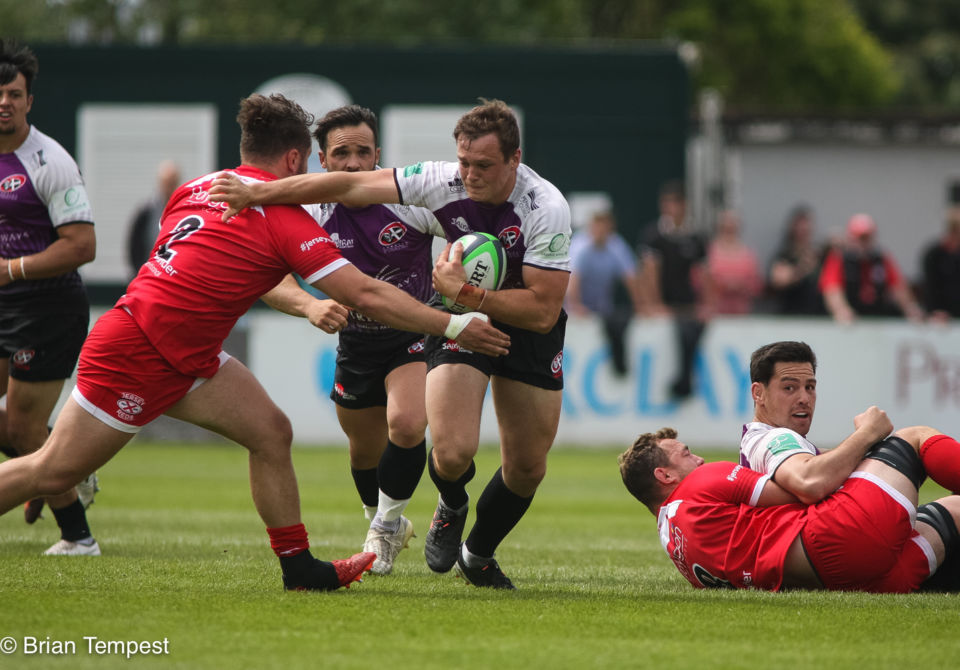 In what was their final game in this season’s truncated Greene King IPA Championship, the Cornish Pirates fell just short of achieving a victory at the Jersey team’s Stade Santander International ground, reports Phil Westren

In the try stakes the Pirates outscored their opponents by five tries to four, but it was not enough, although they at least ended the match with two bonus points.

For their fleeting visit, flying in and out of the island on the day, team changes for the Cornish Pirates included welcoming back AJ Cant from injury. He slotted in at full-back with Tommy Wyatt moving to the wing. In the pack there were returns for loose-head prop Marlen Walker and for hooker Dan Frost ahead of him joining Wasps in the summer. Also, on the tight-head berth, former Namibian under 20s international Patrick Schickerling was set to make his debut.

As the Pirates ran out at Stade Santander International the sound of supporter applause was a welcome one. Missed because of Covid by the Pirates at home this season, it was the third occasion that the Reds had welcomed spectators since regulations on the island permitted.

In a match that in the first quarter gave no indication of a points flow that would ultimately follow, matters were also a little heated at times, at least providing proof that this was no flimsy end of season affair.

The Pirates had launched a first meaningful attack when it was ever busy hooker Dan Frost who linked with wing Maliq Holden and centre Will Butler. Play was taken to the right corner, and hopes were high of a score, but following a line-out six metres out scrum-half Jean-Baptist Bruzulier appeared to have been unluckily adjudged that the ball was nudged forward.

When the first points were registered, they went the way of the Reds. Referee Mr Richards had felt obliged to have a quiet word with Pirates’ lock Josh Caulfield following a contretemps, and after Jersey gained territory from a penalty award, from a second penalty offer it was the Championship’s top scorer, fly-half Brendan Cope, who started the scoreboard ticking.

Home supporters watching this affair were delighted, and even more so when just a couple of minutes later wing Tom Williams won a high ball challenge for him to then sprint in from halfway for a try scored to the left of the posts. Cope added the extras to make it 10-nil.

For the Pirates they now had a challenge on their hands, and one that demanded a response. Credit to them, therefore, that following a catch and drive it was debutant Schickerling who showed raw power to force his way over the line. Attempting the conversion from wide on the right, fly-half Arwel Robson’s effort drifted just wide.

Flanker Antonio Kiri Kiri soon twice showed the athletic pace that he offers as a backrower but, after the Pirates were next penalised again, from a resulting catch and drive hooker Eoghan Clarke scored a converted try to make it 17-5 to Jersey.

Approaching half time, the scoreline was one few might have expected, however the Pirates thankfully reacted once again, as Robson put centre Will Butler into space who timed his pass to enable the supporting Cant to run in an unconverted try.

Arriving at halftime with the score reading 17-10 looked much better, and although the performance thus far had been a little disjointed at times, that the Pirates had come back into the game surely boded well for an interesting second period.

The opening period of the second forty was evenly contested, however after the Pirates lost skipper Tom Duncan to the sin bin, the Reds extended their lead with a converted try scored by full-back Scott Van Breda.

Against a Jersey side that in general has gone from strength to strength in their decade competing in the Championship, it was time for the Pirates to respond once more, and they did, as some fine interplay ended with Frost scoring a try that was converted by Robson.

With play now entering the last quarter, a 61st minute Cope penalty opened a 10 points gap, with it on the balance of play looking that the Reds would be winners. There was still time for Pirates, but too often there was frustration that opportunities created had broken down, and after the Reds scored their bonus point providing fourth try through replacement hooker Jack Macfarlane it was surely all but game over.

Well, that was not a script to be followed by the never-say-die Pirates, who deserved enormous credit in time remaining to provide a real grandstand finish. They were not able to sneak a victory but late tries scored by replacements Shae Tucker and Rhodri Davies, both converted by replacement fly-half Will Cargill, got them within a whisker of their hosts. A win was naturally sought, however in the context of this match to secure not just a four-try bonus point but also one for losing by less than seven points, was rightly some consolation.

After the game, and at the end of a season like no other, Cornish Pirates’ joint head coach Gavin Cattle commented:

“We pride ourselves in never giving up and we saw that at the end, but at the same there were some aspects of our play that disappointed.

“In the set piece, and especially come maul time, Jersey had the upper hand, as we appeared at times to lack our usual energy.

“To finish fourth is for us a little frustrating because we wanted and aimed for a top three finish, but with a small squad anyway injuries unfortunately went against us.”