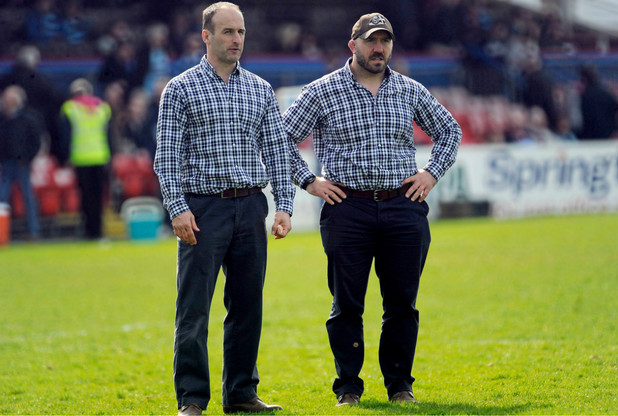 Welcoming Yorkshire Carnegie to the Mennaye Field, the Cornish Pirates recorded a thoroughly deserved and eagerly sought-after win in what was their final Greene King IPA Championship home match of the season, reports Phil Westren.

In a precarious position at the start of the season, under the direction of Chris Stirling the strengthened opponents had climbed to sixth in the league table, just one place below the still fifth-placed Pirates.

The return of scrum-half Alex Day was the one change in the Pirates backs from the side that started at London Scottish last time out, whilst in the forwards Danny Cutmore took the place of an injured Toby Freeman in the second-row and John Stevens was named to wear the number ‘7’ shirt.

After all present had observed an impeccable minute’s silence in respect of innocent victims earlier killed or injured at churches and hotels in Sri Lanka, and also not forgetting journalist Lyra McKee who was tragically murdered during Easter in Northern Ireland, on an otherwise perfect afternoon the Pirates also got off to a perfect start.

Yorkshire Carnegie, however, were quick to respond, with full-back Chris Elder firing his penalty strike through the Penzance posts.

Although Elder soon pulled a long-range penalty attempt to the left of the posts, the visitors soon took the lead for the first time after some potent forward play ended with hooker Dylan Donnellan identified as a try-scorer.

A successful Rojas Alvarez penalty saw the Pirates back in front, but when they looked to attack down the left an error gifted Elder a 45-metres run in for a try that he also converted.

A second Rojas Alvarez penalty narrowed the deficit to just two points, but after home flanker Matt Bolwell was yellow-carded ‘Carnegie’ scored a converted try through winger Myles Thoroughgood. On the stroke of half-time it left the scoreline reading 13-22.

The Pirates had played some industrious rugby and the line-out was functioning well. At scrum time, however, they had been put under pressure.

Whistle blown to start the second period it was not long before the still 14-man Pirates were back into the match. No. 8 Tom Duncan made a telling intercept, and with speedster Robin Wedlake lending support the wing crossed for his tenth Championship try of the season. Replacement fly-half Will Cargill, on for the injured Rojas Alvarez, landed the conversion.

Several Pirates were having impressive games, and none more so than hooker and man-of-the-match Dan Frost, who four minutes later showed immense grit and strength to score a converted try at the Penzance posts.

The Pirates went down to 14 men for a second time in the match when Duncan was sin-binned and during his absence Chris Stirling’s side got back in front with a converted try scored at the old Western National corner by wing Elijah Niko.

In what was proving as hot a contest on the field as the weather enjoyed off it, the pendulum swung back to the Pirates when, on about the hour mark, Cargill kicked a penalty to again give the Pirates a lead.

By now there was a sense that with the spirit displayed by the Pirates they genuinely looked the likely winners, which of course proved to be the case. Although feeling unfortunate to lose a third player of the afternoon to the sin bin when Cant was yellow-carded, following a late red card shown visiting replacement hooker Joe Buckle the result was wrapped up thanks to a second penalty kicked by Cargill.

To survive three sin-binnings against opponents who were striving to build on a five-game winning run was truly commendable and the players deserved to enjoy their post-match celebrations. Along with their supporters, they surely did.

Cornish Pirates’ co-coach Alan Paver had also envisaged the game being exciting and positive to overall make for smashing occasion, and he was proved right.

Hey, you can’t beat the return of that good old – good feel factor!