Late Resurgence is Not Enough 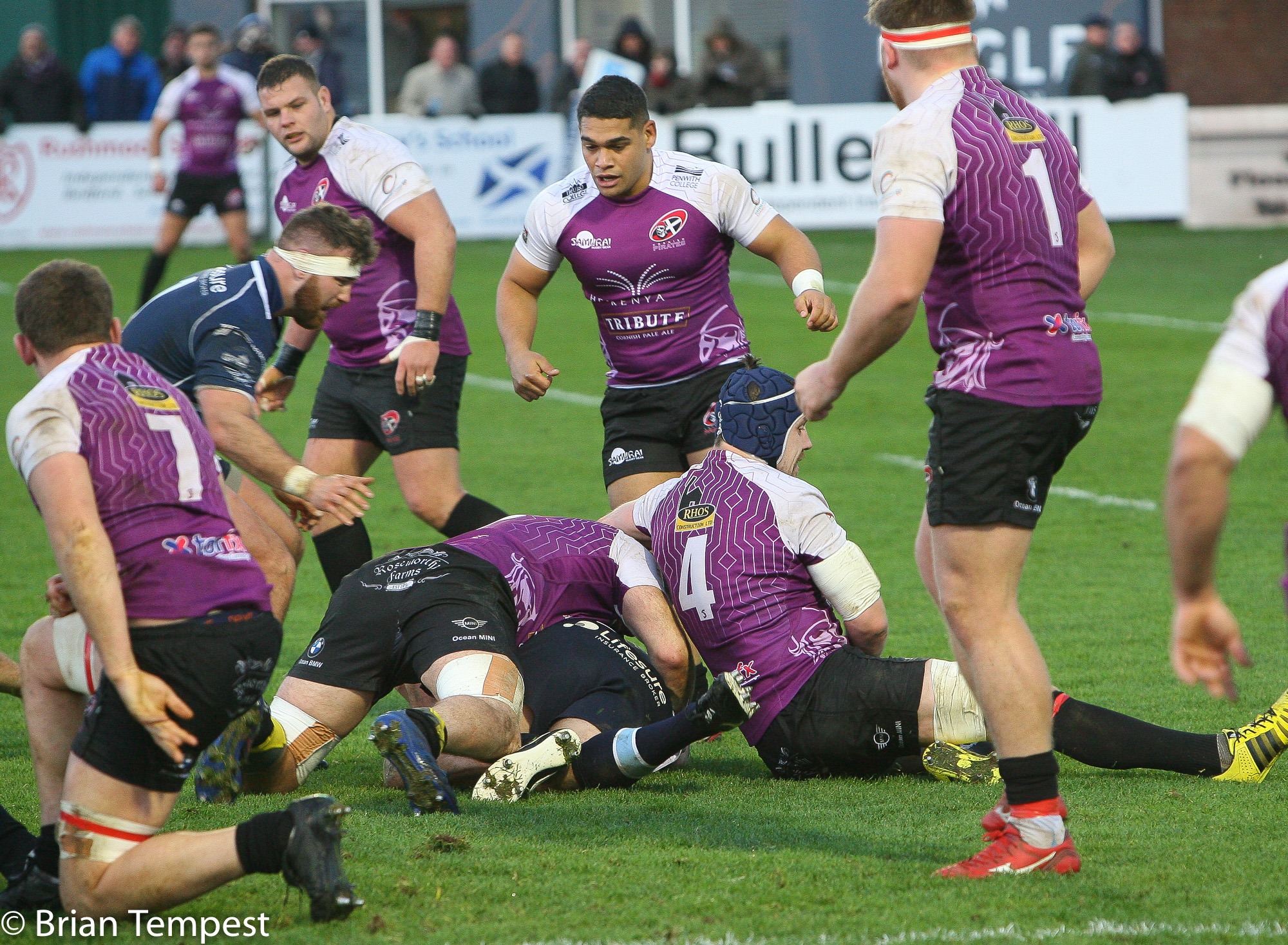 Playing their penultimate Pool 3 game in the new Championship Cup competition, despite this loss the Cornish Pirates will still ultimately progress to the quarter-finals stage – either as one of the two best third-placed teams across the three pools or as the runner-up in their pool.

The Pirates won 22-20 at home against the Blues in their Championship Cup opener and expected it to be nothing less than tough and likely close once more. Tough, it was, however but for a spirited late resurgence, it was anything but close.

One change in the backs from the side that started at Hartpury last weekend saw Alex Day selected at scrum-half, whilst in the forwards there were returns for hooker Tom Cowan-Dickie, prop Jack Owlett, the second-row pairing of Toby Freeman and skipper Brett Beukeboom, plus back-rowers Matt Bolwell and Tom Duncan.

With a festive feel about Goldington Road, after flanker Josh Buggea led the Blues out on his 100th appearance both sides went close to scoring in the opening exchanges, the Pirates following a charge down by centre Dan Koster and then Bedford who built the phases only to give a penalty away just five metres out from the Pirates line. However, in the 13th minute the home side, playing with the advantage of their renowned slope, got the scoring underway thanks toa penalty slotted by Will Hooley, a former England under 20s and present-day USA international fly-half.

The Pirates were in general guilty of giving too many penalties away and their cause not helped when Beukeboom was shown a yellow-card for making a deliberate knock-on. It was also not long before the Blues took due advantage, when wing Pat Tapley scored a converted try between the posts.

Having suffered something of a set-back, two minutes later the14-man Pirates fell further behind. Stretched defensively, Bedford’s replacement wing Ed Coulson was the man to ultimately make them pay with another converted try. Coulson’s early cameo then came to an end, the return to play of wing Dean Adamson following a head injury assessment, seeing Coulson take his place back on the bench.

The penalty count against the Pirates would continue to climb, at the same time gifting Bedford opportunities to gain advantage, which they did once more before the break thanks to a try now scored by Adamson. Hooley was this time luckless with his conversion attempt, as it rebounded off the woodwork.

In first half time remaining, further pressure applied by the Blues saw prop JackOwlett become the second Pirates player of the afternoon to be sent to the sinbin. Thankfully, the Pirates leaked no further points for the interval to arrive with the score reading 22-0.

After a truly disappointing first half, the second forty would be a real test of character for the Cornish team, the first nine minutes of which they would have to play a man short. However, there was at least initial credit due them for displaying extra energy to provide a glimmer of hope for points.

As the half progressed, and replacements were made, it would be Bedford who would score again, when midway through the period Adamson crossed for his second try of the afternoon. It was also one that secured the bonus point for the home side.

Under the glow of the Goldington Road floodlights, faithful visiting supporters could be forgiven for looking somewhat forlorn, despite an effort from full-back Kyle Moyle that saw him go close.

In general, the Pirates certainly had a little more of the play in the second halfbut there were no points to show for it until, after Coulson was yellow-cardedfor him to now assess the comfort of the sin bin seat, they made numericaladvantage count. Two fine tries were scored by wingers Alex O’Meara and RobinWedlake, the latter’s well converted by replacement Harvey Skinner. Then, deepin injury time, there was also a try out wide for centre Koster, adding to thetwo he scored the previous week. Yes, it was an admirable resurgence, but sadlyit was all just too late.

At the final whistle, with one pool game remaining it was time to sketch all the various permutations. In short, as previously mentioned, the Pirates will compete in the quarter-finals stage, their aim now to ideally secure the runners-up spot in their pool by beating London Irish at home next Saturday. It is a game now with added significance, and although a tough ask against a team they are yet to beat, the focus will be on doing just that. It will also be one of those occasions when a big home crowd can help play their part, to at the same time witness what promises to be a real Christmas cracker.

At the end of the game against Bedford Blues, Cornish Pirates co-coach Gavin Cattle said. “The penalty account against us was astronomical and ultimately if you want to win games you can’t give 20 penalties away.

“We obviously struggled at the set piece, where you need ball to play with, and in the first half we gave up the ball too easily at the attack breakdown.

“Yes, the boys are hurting from the performance today, however I’m proud that they stuck in there and showed resilience and will now want to put things right next week.”