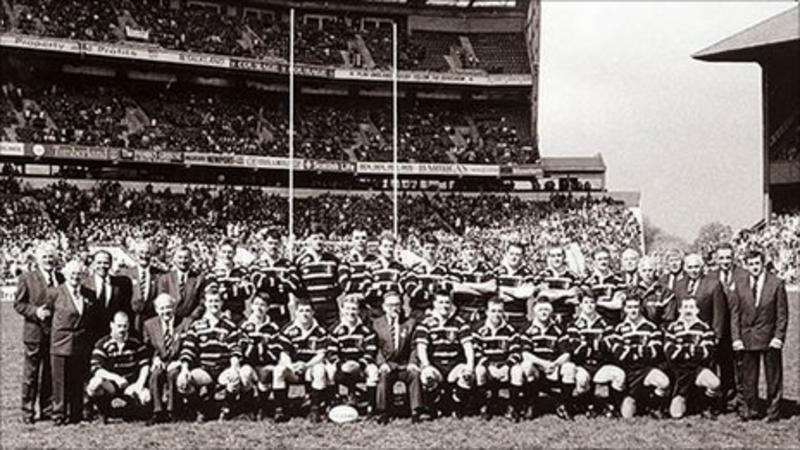 A look back from the archives.

The greatest comeback in the history of Cornish rugby sent Duchy fans delirious with delighted disbelief at the end of Saturday’s tumultuous triumph at Twickenham.

As the final whistle blew, signalling an unforgettable 29-20 victory over the White Rose of Yorkshire, the realization suddenly dawned that Cornwall had bridged an 83-year gap and become county champions for the second time. A sea of black-and-gold bedecked supporters instantly invaded Twickenham’s hallowed turf as Trelawny’s Army raced to hail their conquering heroes.

Players were hoisted shoulder-high amid scenes of joyous Cornish celebrations, before injured skipper Chris Alcock led his 15 heroes up the steps to claim the county championship trophy from the Duke of Edinburgh. The rapturous roar that greeted the players as the coveted prize was held aloft could probably have been heard in neighbouring Richmond.

Yet three-quarters of an hour earlier the cherished Cornish dream had seemed to be vanishing in the icy wind swirling round the Twickenham stands. With twenty minutes left to play, Yorkshire had just scored a controversial try to set up a seemingly unassailable 16-3 lead and leave Cornwall with a veritable mountain to climb.

But from that moment on Alcock’s army was suddenly galvanized into a gargantuan effort that saw them snatch a sensational victory from the jaws of defeat. First quicksilver scrum-half Richard Nancekivell darted over for a try, then Grant Champion landed a penalty and suddenly Cornwall were only four points adrift.

In a nail-biting, nerve-tingling climax Nancekivell raced over for the equalising try in the dying seconds, leaving Champion with a conversion attempt to clinch the title. The whole of Cornwall held its breath in anticipation, but his kick slid just wide of the right hand post.

The miss proved to be a blessing in disguise for the thousands of supporters watching at home on television all over Cornwall, as well as for the estimated 40,000 Cornish fans in the crowd, who had given the occasion a cup final atmosphere rarely seen at the home of English rugby. The players’ response in extra time was nothing short of magnificent, with Cornwall’s pack in particular firing on so many cylinders that even the famous All Blacks would have been hard pressed to stop them.

Certainly Yorkshire had no answer as veteran winger Tommy Bassett emerged from under a ruck of players to claim the try that gave Cornwall the lead for the first time in the match.

The icing on the Cornish cake came from St Ives fly-half Billy Peters, who stormed over the line in the second period of extra time to complete a momentous comeback that will live long in the annals of the game — and in the memories of all those lucky enough to have seen it.

It was heady stuff for the Duchy’s fervent fans, among whom was 103-year-old Bill Osborne of Redruth, believed to be the only man alive to have witnessed Cornwall’s last championship victory way back in 1908. With him were three generations of the Osborne family — his son Frank, 75, grandson Barry, 50, and great-grandson Simon.

The following is from the same edition of The Cornishman (April 25th, 1991). It’s the more detailed account of the match that appeared on the sports pages. It’s taken from the Penzance edition — hence the particular references to the St Ives players.

A superb grandstand finish in extra time made Cornwall the rugby champions of England. After trailing 16-3 a quarter of an hour into the second half, on Saturday, the Duchy rallied and showed the form which took them to the Twickenham final.

What a team effort it was.

What was the spark which ignited the fire in Cornish bellies midway through the half, when all had seemed lost? The crowd of well over 30,000 Cornish supporters — Trelawny’s Army — had gone quiet at this stage, and only the beat of Falmouth Marine Band’s bass drummer could be heard.

Skipper Chris Alcock, injured early on, continued to see his side trail, and then went off for further attention. Mark Chatterton came on to play on the right wing — his best position — with Tony Mead switching inside to centre. Former St Ives player, Glyn Williams, took over as skipper, with Grant Champion leading the outsides.

Play was soon transformed, to the delight of Trelawny’s Army! Basically, the Cornish front five, apart from some penalty kicks conceded by Reed, had held their own with the bigger Yorkshire pack. The form of the Cornish front row was telling.

For almost an hour the Yorkshire side had prospered, with flankers Simon Tipping and Peter Buckton excelling, backed by Sean Bainbridge at No.8. Halfbacks Townend and Scully had the edge over Nancekivell and Peters. The Yorkshire threes, backed by Liley, were ahead of their counterparts.

Scores in the 13th, 26th and 42nd minutes had given the White Rose a lead of 10-3 at the break. Champion had kicked a penalty goal in the 40th minute after he and Peters had missed with shots at the sticks.

Fullback Liley handled twice in a move with Harrison, the former England international wing, and now Yorkshire skipper. This sent centre Johnson over for the opening score. The fullback later slotted over two penalty goals, in spite of the hisses and jeers of a minority of poor sports in Cornish colours.

Cornwall were slow, fumbled, marked poorly, and just failed to get into the match. And they shaped little better in the opening minutes of the second half. With Yorkshire piling on the pressure, a penalty was conceded from a kickable position. There was drama as Liley came forward for the kick. He was alert to advice from his skipper, Harrison, who had led Yorkshire to a win over Middlesex four seasons earlier at Twickenham. Liley tap-kicked the ball, fed to Scully, who crossed for the try as Cornwall went into a huddle. Liley converted for a 16-3 lead after 55 minutes’ play.

Many felt that this was the final nail in the Cornish coffin. How wrong the Jonahs, and certainly many of those in the press box, were.

Cornwall came back slowly. Williams was inspired, Nancekivell was productive. From a scrum Nancekivell scurried over for Champion to add the extras. With 15 minutes left, could Cornwall work that old rugby wizardry and score at least twice for victory?

Champion missed with a shot at the posts. Chatterton made a dash down the wing, but touch judge Howard intervened — a foot had gone into touch. Champion, however, booted a penalty to make it 16-12 with just minutes left. A charged-down kick set up a scrum, and Nancekivell, playing superbly, went over for the try, making it 16-all.

Could Champion, under the most intense pressure possible, kick the match-winning conversion? The answer, alas, was no. The police officer, easily Cornwall’s top points scorer, fired to the left of the posts. Extra time of ten minutes each way had to be played.

And Cornwall were on the rampage! Each and every player rose to the occasion, while the sea of black and gold yelled itself hoarse.

Champion faced the posts, once more, for a penalty, and his kick was spot on. St Ives’ Tommy Bassett was all over the pitch, playing the game of his life. He joined the forwards in a surge to the line which brought a try for a 7-point lead at the halfway stage of extra time.

More drama followed in the early moments of the final period, with Billy Peters, another of the St Ives players, going over for a try. Coolly, Champion converted for a 29-16 lead. It was fantastic, with 26 Cornish points coming in as many minutes.

The third St Ives man in the side, Jason Atkinson, was in cracking form.

Cornwall were virtually unassailable, but Yorkshire showed some of that Cornish spirit. In the dying minutes the Yorkshiremen ran the ball wide, at pace, for right winger Harrison to go over in the corner. Liley hit the upright with his conversion, and the final whistle from referee Mr Roger Quittenton, of the Sussex London Society, opened the floodgates for a sea of black and gold to swamp the pitch.

Justice was done, Cornwall had stuck to their task. Inspired by Glyn Williams, they had won the county title for the first time in 83 years.

A link to the interviews aired by BBC Radio Cornwall, compiled by Ross Ellis to mark the 30th anniversary of Cornwall’s historic win