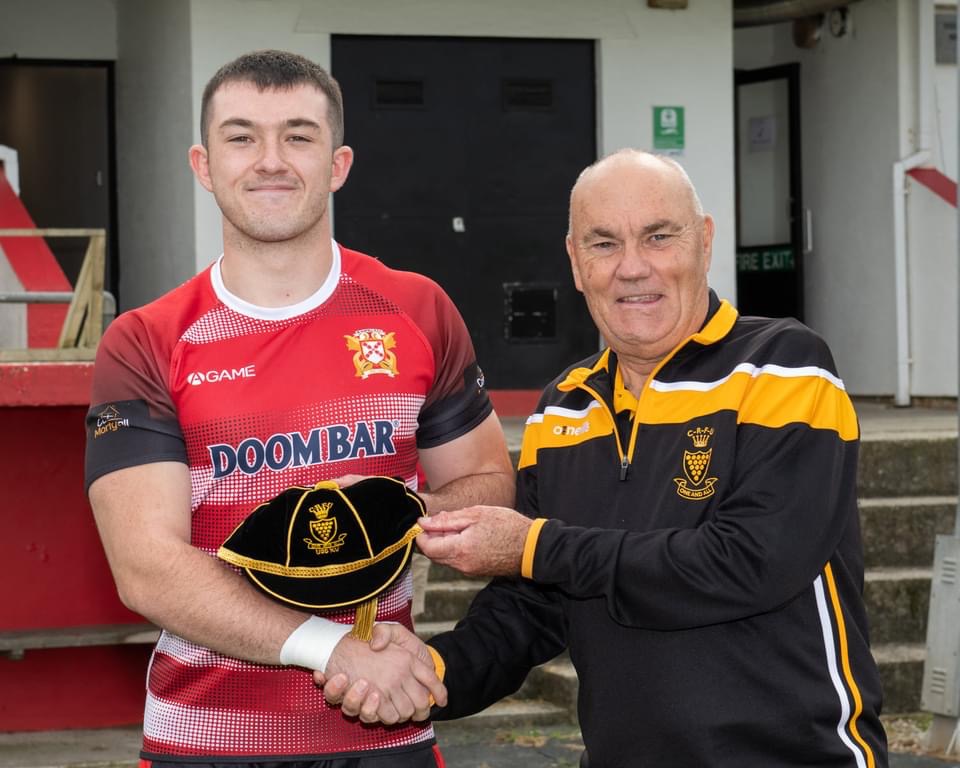 Ben Plummer who plays his rugby at St Austell RFC was presented with his U20’s Cornwall cap at his home club on Saturday 9th October.

Ben earned his Cornwall tie on his first appearance for the U20’s back in February 2019 against Devon and was a regular squad member until the last game before Covid 19 struck in the away victory against Gloucestershire in March 2020. Had it not been for the pandemic Ben would have potentially made several further appearances and had his cap presented at one of the games in front of his teammates!

The presentation took place on the pitch before their home match against Old Patesians It was pleasing to see not only the players who played with Ben on the last occasion for Cornwall in the photograph, but they, and many other ex U20’s in the St Austell side on the day which is a testimony to club’s youth policy and player development. The CRFU President John Sumnall congratulated Ben on his achievement and wished him well in his future rugby career.

Congratulations to Ben on this well-deserved presentation.

Steve Murley – DOR St. Austell RFC added. “We believe it is a valuable and important of our players on-going development to represent Cornwall whenever selected.

They enjoy being challenged and tested in competitive environments against the best in their age group,  both within the county and in national championships.  In addition it takes players away from their home clubs and out of their comfort zone where they have to learn to adapt to new coaching styles and playing strategies. That helps make them more adaptable and flexible in their thinking.

All of this helps to develop players who not only see the standards they have to achieve to  progress their rugby careers but also helps them to become problem solvers and to think on their feet when confronted by situations on the field.

We can see many positives in our players representing Cornwall and believe it complements the coaching they receive within our club. All at St Austell appreciate  the help and support that we get from the CRFU and the respective age group coaches and support staff “