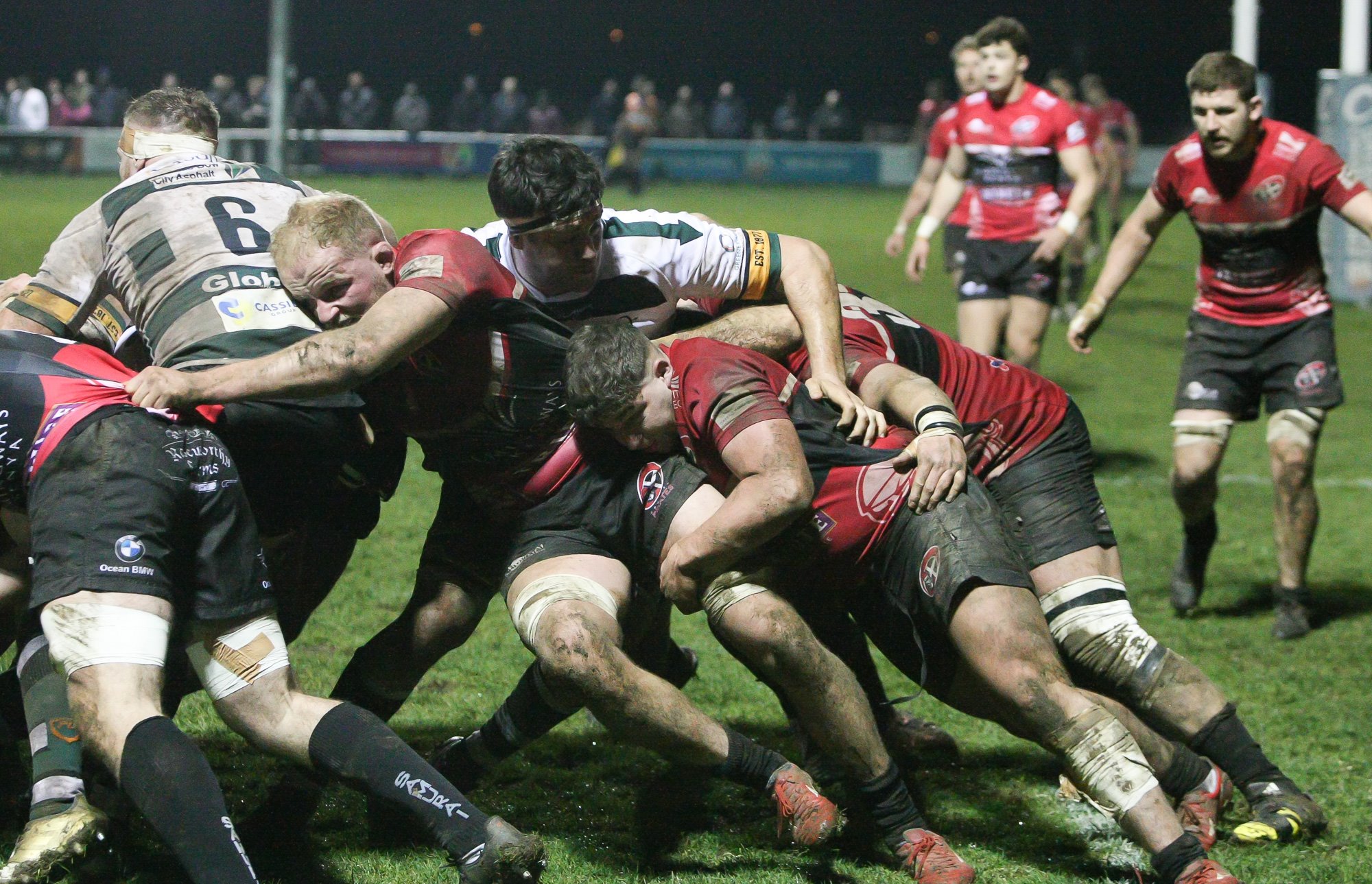 Post their Sunday exit from the semi-final of the Championship Cup at Ealing, a short turnaround for the Cornish Pirates saw them return to Greene King IPA Championship action for this Friday night fixture at Nottingham’s Lady Bay Sportsground. For an at present ‘bare bones’ Cornish Pirates squad it was also always going to be a tough ask, however they at least departed with a losing bonus point.

The Pirates lost home and away to Nottingham last season but emerged 36-28 victors when the two teams met at the Mennaye Field in October. As for their respective league positions ahead of this Round 16 game, Nottingham were in sixth place and the Pirates in fifth.

With several players having picked up injuries against the Trailfinders, certain changes in personnel were inevitable. In the absence of Kyle Moyle, Maliq Holden was named at full-back for what was also his Championship debut, whilst Robin Wedlake switched from left to right wing in place of Alex O’Meara. The experienced Matt Evans was selected in the number ‘11’ shirt, a fit again Will Cargill returned to the starting line-up at fly-half and Javier Rojas Alvarez slotted in at inside centre. In the forwards, Tom Duncan was named to start at No. 8 and Dan Lee moved to the blind-side flank in place of the injured Matt Bolwell. One other change saw Josh Caulfield named to partner skipper Brett Beukeboom in the second-row.

On a February evening at ‘Lady Bay’ that was cool but also calm and dry, after Canadian international fly-half Shane O’Leary kicked the game off for the ‘Green & Whites’ it was not long before Holden was quickly into the action. Bravely taking a high ball, he was fouled in the process, resulting in a penalty awarded the Pirates. Cargill then kicked well to the corner, and after Caulfield provided clean line-out ball it was hooker Dan Frost who, for a second week running, was the first name on the scoresheet, his second minute try added to the opener he scored at Ealing. Cargill’s conversion went wide of the posts.

A period of play that followed saw the Pirates guilty of giving too many penalties away, enabling O’Leary to soon slot a successful kick at goal and scrum-half Murray McConnell to then score an unconverted try from a line-out close to the Pirates line.

Midway through the first half a Cargill penalty levelled matters at 8-all, however the home side soon regained the lead when their slick handling enabled wing David Williams to score another unconverted try, this time wide out on the right.

Unfortunately, 13-8 would soon change to 20-8 after Nottingham’s full-back Sean Scanlon ran all of 60 metres for a superb try this time converted by O’Leary.

As half-time approached the Pirates went through a considerable number of phases to fully test the home defence. They did extremely well to keep their composure and the just reward was their second try of the match, again scored by that man Frost. It left Cargill with a less than straightforward chance to reduce the deficit, but he did just that for the teams to return to the changing rooms with a scoreline reading 20-15.

The Pirates also started the second half in positive mode, Holden again a willing competitor and an early penalty opportunity also earned that was kicked by Cargill.

Further enterprise followed from the visitors, including a bout of clever passing with Rojas Alvarez and flanker Stevens to the fore. Discipline had at this stage improved, in a match that thus far was proving wholly entertaining.

When a next considered kickable penalty was awarded the Pirates, it was a long-range effort from Rojas Alvarez, that fell just short.

Considering their quick turnaround, into the last quarter would be an added test for the Pirates, who were grateful twice to Wedlake for tidy work at the back that prevented possible Nottingham scores.

Time ticking away and with several fresh legs arriving off the bench a tense finale was likely expected, and likely more points, but it wasn’t to be. The penalty slot by Cargill on 43 minutes had surprisingly proved to be the last points of the match.

The Pirates were to be admired for their overall gritty effort, however Nottingham managed to hold territorial advantage and frustrate, and to ultimately secure their narrow victory.

At the end a losing bonus point was the least the Cornish team deserved, with a chance to now recharge batteries ahead of a welcome home game scheduled against Jersey Reds on Sunday 10th March.

Speaking after the game against Nottingham, Cornish Pirates co-coach Gavin Cattle said. “We were playing a good Nottingham side and I am proud of the effort shown by our players, especially considering such a short turnaround. Their physicality was right up there.

“Sometimes in sport it’s more than just winning. We went close but it was the sheer effort witnessed that was deserving of praise.”