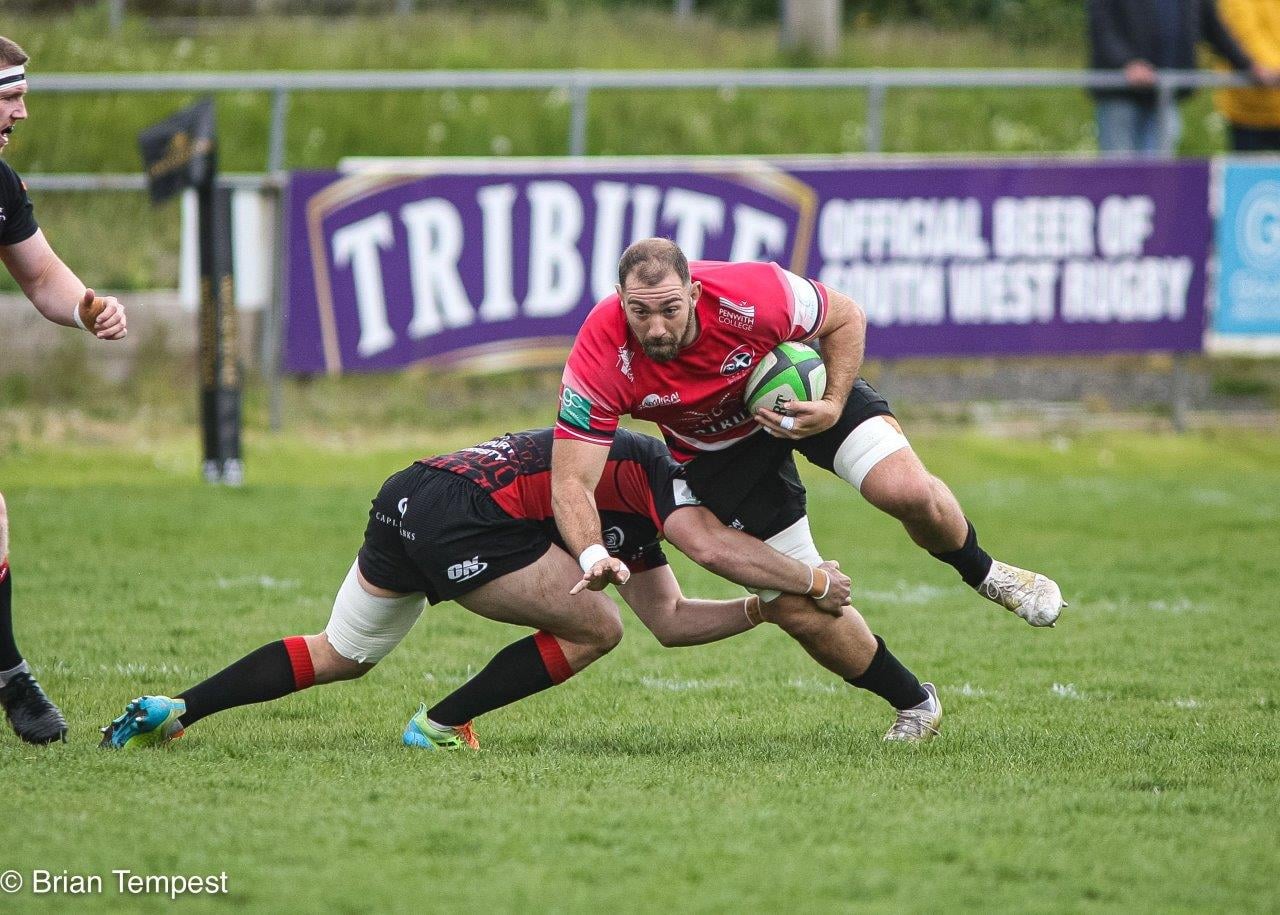 By Phil Westren, at the Mennaye

Playing their penultimate fixture in this season’s somewhat shortened Greene King IPA Championship campaign, in what was also their last home game the Cornish Pirates won convincingly against Hartpury.

It was an entertaining encounter, with both sides playing their part. A total of 12 tries were registered in the match – four for the visitors and eight for the Pirates, including a hat-trick apiece for skipper Tom Duncan and replacement hooker Dan Frost.

There were several changes in the Cornish Pirates team that won at Coventry last time out. In the backs, with a fit again Maliq Holden returning on the wing, Will Butler reverted back to inside centre. Also, at scrum half, after several appearances off the bench, Jean-Baptist Bruzulier returned to the starting line-up.

As for the forwards, Hayden King wore the number ‘1’ shirt, whilst Tom Cowan-Dickie, who had made three appearances as a replacement since recovering from injury, was about to make his first start of the season. As for the pack’s back five, they remained the same.

Playing towards the Newlyn end of the ground it was Hartpury who opened the scoring. Fly-half Josh Bragman made a jinking run inside the Pirates ‘22’, and with the ball ultimately worked left it was wing Ben Foley who scored an unconverted try in the old Western National corner.

In the same period of play Cowan-Dickie’s match also cruelly came to an end, the luckless hooker having to depart proceedings because of a neck injury.

Hartley had a sprinkling of experienced performers in their ranks, and none more so that Botswana-born No. 8 Iain Grieve, who is a former Bristol, Plymouth Albion, and Ealing Trailfinders player. However, soon after home full-back Tommy Wyatt twice impressed to take a high ball under pressure, the first example seeing him light up the Mennaye with an excellent kick ahead and chase, the Pirates worked the ball left for Holden and Butler to apply pressure at the scoreboard corner. With the Pirates scrum also showing dominance, referee Mr. Thomas had no hesitation in awarding the Pirates a penalty try.

The visitors strived to respond, but in the process Pirates’ wing Alex O’Meara suddenly intercepted and immediately put on the burners to run half the length of the field for a score at the Penzance posts. Fly-half Arwel Robson’s conversion made it 14-5.

Hungry for more points, the Pirates cause was being helped by the mounting penalty count against Hartpury. Able to post the ball to the corners, the opportunities to set up potent catch and drives delivered the goods, with firstly converted tries for Duncan and Frost, the latter’s a bonus point providing effort, and then another for Frost, this time unconverted.

Yes, 33-5 looked good on the scoreboard, but there was still time before the break to enable the Pirates to further extend their lead, which they did, when Duncan’s second converted try, scored in the 39th minute, made it 40-5.

During the afternoon, the club flag at the Mennaye Field flew at half-mast. This was a mark of respect to the memory of former 500 games player and team secretary Keith Stirling who had passed away during the week. Words were also expressed in memory of Camborne stalwart Peter Floyd and to Barry Chadwick, brother of Pirates’ match day volunteer Mark Chadwick, following news that they too had sadly died.

Back to the rugby action, the last 40 minutes at home for the Pirates this season, there was every hope that they could kick on and register still more points. They did, with the energetic Frost and Duncan each securing their hat-tricks, but there was credit also to Hartpury who, on the scoreboard at least, troubled the operator most. The impressive Bragman scored a try and two conversions, and there were also fine tries touched down by centre Robbie Smith and wing Sam Goatley, whose final try of the game was converted by centre James Williams

“Naturally we are pleased with scoreline, as it is one we would certainly have taken before the game, and although I didn’t enjoy the first or last 10 minutes we played some good bits of rugby in between.

“In the first half our catch and drive worked very well, with Arwel kicking well out of hand to put us in good positions which enabled us to apply the pressure close to the Hartpury line, and it is something we could perhaps have made more of in the second period, the lesson being don’t get bored of what works.

“Our front row also formed a powerful unit and that again also gave us a platform to help keep the scoreboard ticking over.”

“We were a little disappointed that Hartpury managed their bonus point try at the end, but through playing catch up rugby and shifting the point of contact they deserved it.”